Natasha Pulley follows up her affecting 2015 steampunk-esque debut The Watchmaker of Filigree Street by sending her characters to Japan in The Lost Future of Pepperharrow. In between we have had The Bedlam Stacks  (2017) which has some very loose connections to both books, enough at least to understand that they exist in the same universe. But The Lost Future of Pepperharrow is definitely a sequel, following Pulley’s characters into more treacherous historical territory.

London in the winter of 1888 is a toxic peasoup of noxious fog. Public servant Thaniel Steepleton is trying to cope with not only difficulties navigating the streets but also breathing due to his compromised lungs when he is commanded to travel to Japan to act as an interpreter at the British embassy. He is concerned that he will have to leave behind his lover, Japanese nobleman and watchmaker Keito Mori, and their adopted daughter Six, when Mori returns from a mysterious overseas trip and says that they will accompany him. Mori wishes to return to Japan to support the Japanese prime minister to deal with a Russian naval blockade, a situation that he has had some mysterious hand in creating. It turns out, that Mori and Prime Minister Kuroda have a history, connected with Mori’s ancestral estate in Yokahama. But Kuroda wants Mori for much more than his counsel, he knows that Mori has the ability to see into the future and he wants to harness that power for himself.

On arrival in Japan, Steepleton finds his world, and his understanding of Mori in particular, turned upside down. Not least of which is the existence of Mori’s wife – a half English half Japanese former actress called Takiko Pepperharrow. Steepleton retreats to the British Embassy where he has to deal with staff complaints about the appearance of ghosts. But when Mori disappears and the stand-off with the Russians starts to deteriorate, both Steepleton and Pepperharrow try to track Mori down, each discovering different pieces of the puzzle.

It must be a challenge to write a character who knows the future, as it can drain the life out of any tension. Pulley played this ability only a little in The Watchmaker of Filigree Street but in The Lost Future of Pepperharrow, Mori’s ability to see potential futures is front and centre. As always, the best way to challenge a character’s power is to limit it or take it away in some form, which Pulley does for a time, putting Mori and his friends in the path of real danger. But when the power is in play, Pulley’s focus is on how it can change people and potentially makes them cruel, using friends , families and allies as pawns to achieve a particular end. Which in some ways is somewhat true of this whole novel in ways that are ultimately surprising and heartwarming rather than sinister.

The plot revolves around real historical characters and events but with Pulley’s steampunk fantasy twist. Aside from the precognition, there is a secret lab trying to use technology developed by Tesla to project electricity wirelessly and to potentially see the future. And there is always, in the background, Mori’s clockwork octopus Katsu that seems to move without needing to be powered up and definitely has a mind of its own.

But as with other works by Pulley, it is the characters and central relationships that make this book work. Not only Steepleton, Mori and Pepperharrow, but a panoply of interesting minor characters, including Prime Minister Kuroda, Grace Carrow, Steepleton’s ex-wife and scientist, and her noble Japanese husband.

The Lost Future of Pepperharrow, like the books that came before it, is a gem. Taking a little known incident from Japanese history as its jumping off point, it is a mix of historical thriller and steampunk fantasy. But it is the central relationship between Mori and Steepleton, transgressive as it was in the time in which it was happening, that forms the emotional core of the novel and brings the whole enterprise so satisfyingly together. 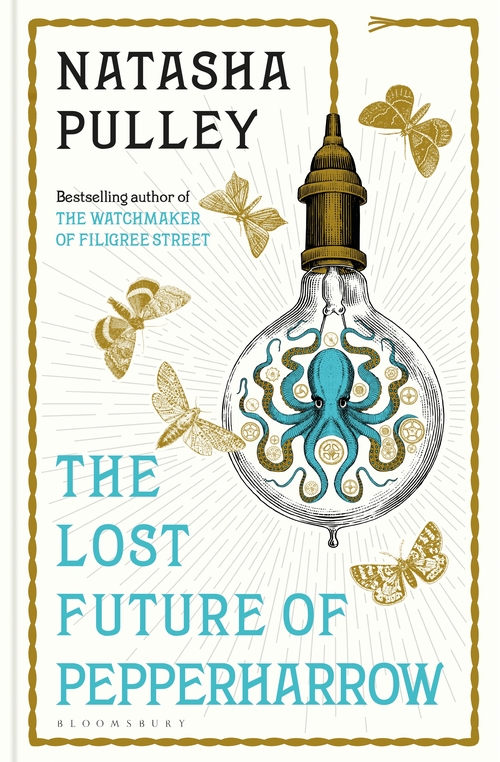