John Scalzi’s Interdependency series (The Collapsing Empire, The Consuming Fire) has given us some of the most enjoyable space opera of the last few years. Scalzi has taken the premise of Isaac Asimov’s Foundation series and given it a seriously modern twist. Peopled with flawed characters facing the potential end of their civilization and the political and social machinations surrounding this impending disaster, the story feels relevant whilst also often being irreverent.

In the opening Scalzi once again shows why he is the master of exposition that does not feel like exposition. And even if it has been a couple of years since the second book in this series, readers will be back up to speed with all of the main characters relatively quickly without feeling like they’ve been subject to a recap. The plot picks up directly after the end of The Consuming Fire. The end of the Interdependency is still inevitable as the “Flow” that joins disparate parts of the Empire and ensures the survival of far flung colonies continues to break down. While Cardenia, aka Emperox Grayland II, continues to find a way to save the billions of people who would otherwise be trapped by the collapse of the Flow, the forces that have tried to assassinate her twice regather and start to plot again. There is still only one planet, End, on which humanity might survive following the collapse and the heads of the wealthiest trading houses have decided that by getting rid of Grayland they can save themselves, travel to End and leave their populations behind.

And so the scene is set for another round of political manoeuvring, reverses, schemes foiled and succeeding, historical reveals and desperate plans to save the Interdependency involving the use of maths. While all of the main characters get some great moments once again the star of the book has to be the foul-mouthed Kiva Lagos, who found love in the previous book and has become integral to Grayland’s plans but finds herself in trouble early on. And there is no trouble that Kiva cannot scheme her way out of. But all of the players get a chance to shine, the moustache twirling (if she had one) Nadashe, Grayland’s scientist lover Marce and Grayland herself, trying to thread a various precarious needle while constantly under threat.

Again, the parallels between the fate of the Interdependency and the global threat of climate change are just below the surface. In this case, the response of the wealthy, those who could do something about the problem if they thought globally rather than personally is thrown into sharp relief. Just as one example of Scalzi’s observations of the rich in the face of impending disaster:

As far as Kiva could tell, whenever selfish humans encountered a wrenching, life-altering crisis, they embarked on a journey of five distinct stages:

The Last Emperox is a great conclusion to a great space opera series. Another rattling tale full of very human characters dealing with an unprecedented challenge, told with verve and style. Although this is officially the end of the series, the door is left open to more stories in this universe, with a possible expansion into new territories. Any of which would be welcome. 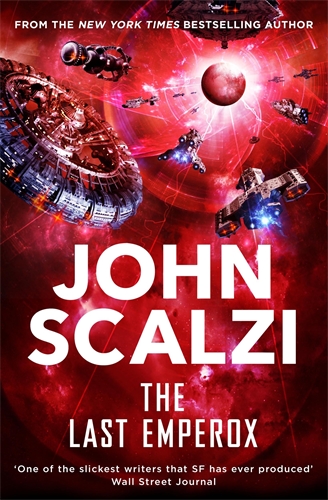