Analee Newitz burst onto the science fiction scene with her debut Autonomous. That book took some well-worn biopunk, cyborg and artificial intelligence tropes and deployed them in a unique way that explored bigger issues such as capitalism, identity and desire. In The Future of Another Timeline she takes on another well worn corner of the science fiction world – time travel. And perhaps even more obviously this time, despite all of the speculative trappings, her focus is very much on the here and now.

When the book opens Tess, a time traveller from 2022 has jumped back to 1992. This is not a particularly remarkable thing as in Newitz’s universe time travel is mainly an academic pursuit. Five sites around the world have been discovered that allow users to go back in time. No one knows how the sites came into existence but some, such as the one at Raqmu in Jordan (Petra in our world) have been known of and used for thousands of years. But Tess is more than just an academic, she is part of a group known as the Daughters of Harriet (named after former slave, soldier and in this reality senator, Harriet Tubman) who are trying to edit the timeline so that the forces that made abortion illegal in the United States do not come to be. Only, it turns out, the Daughters have opposition, another group from further in the future who are also trying to influence the timeline to make things more restrictive for women but also, once they succeed, destroy time travel technology. At the same time, after seeing her young self in 1992, Tess is trying to correct mistakes she made as a teenager.

As with other time travel stories, there are plenty of rules around how to travel. For example: travellers cannot take anything with them other then their clothes, they can’t go back to a time they have visited before and they can’t go forward from their original time. But aside from that, rewriting history is completely up for grabs and this allows Newitz to explore different theories of history, in particular “Great man” theory versus collective action. That is, whether specific individuals affect history more then social movements. And she has lots of fun doing it, sending her protagonist to the Chicago World Fair in 1893, to ancient Petra and even further back in time.

The problem with The Future of Another Timeline, as with many time travel stories is that if you think about it for too long the whole enterprise falls apart logically. This mainly comes from the fact that storytelling is linear and time travel introduces loops and the rewriting of what has come before begging the question how was it ever different. Newitz’s book is replete with continuous, layered paradoxes, partially managed by allowing some characters close to the epicentre of a change to remember how things were before. In fact, there is so much paradox built into some scenarios that it can make a reader’s head hurt trying to work out a logical flow for the story. When Tess edits her own timeline significantly to the point where her life takes a different track, she literally get headaches as she tries to maintain two very different versions of the past in her head.

On the time travel front the plot is reminiscent of the recent Doctor Who episode ‘Rosa’. In that episode, white supremacists from the future go back to 1955 to try and prevent Rosa Parks from starting her protest. As with Doctor Who and many time travel tales, the trick is to ignore any logical or causal roadbumps and just go with the flow. Because time travel in this case is just a mechanism for telling a more important story. A story about the battle for basic human rights and the impact of collective action to secure those rights. About being eternally vigilant to the forces that seek to enslave, denigrate and disempower others. And those are stories worth telling. 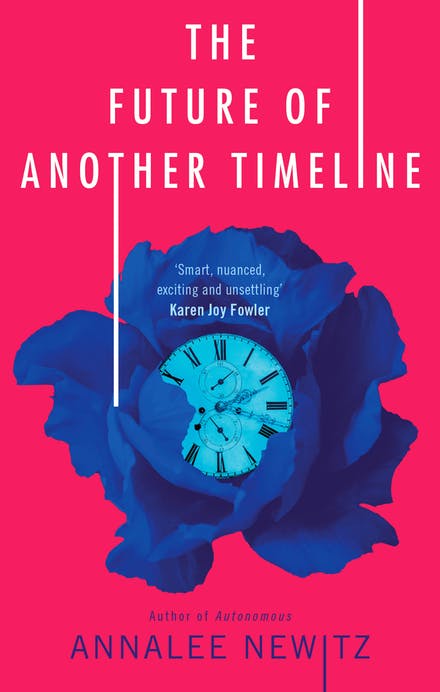