Ambrose Parry is the pen name of prolific and prize winning Scottish crime author Chris Brookmyer and his wife Marissa Haetzman, an anaesthetist and medical historian. Their first book together The Way of All Flesh as well as having a serviceable crime plot involving a serial killer, looked at the discovery of chloroform by James Simpson a Professor of Midwifery in the 1840s. Central to that book were Simpson’s new student, Will Raven, and housemaid, turned assistant Sarah Fisher. Raven and Fisher are back in the sequel, set a year later, but things have changed.

Will, now a fully qualified doctor, comes back to Edinburgh after a stint on the Continent to take up a new post as assistant to Professor Simpson. He returns to find Sarah still working for Simpson but married to another doctor. Will still has problems with the local organised crime boss Flint and Sarah soon pulls him into her investigation of allegations and rumours against Simpson by fellow practitioners. At the same time, first person narrated chapters reveal another killer on the streets of Edinburgh, one who Raven and Sarah only stumble upon accidentally and even then it takes them some time to comprehend what is happening.

Once again, the plot is woven in and around real events. Simpson was accused by his fellows of being responsible for the death of a woman. An accusation based solely on their supposed examination of her blood-stained mattress. The killer’s backstory is based on a true story too although not one that happened in Edinburgh. The interesting thing about this and the previous book is not so much the solution of the crime but how social mores and assumptions of the time stand in the way of discovering the truth.

Once again the heart of this story is the lives of and relationship between Raven and Sarah. Raven did not pursue his relationship with Sarah as he felt it would not be socially acceptable for a doctor to marry a housemaid. Now he has returned to find that she has married another doctor who does not care for society’s rules (although he has enough money to do so). Meanwhile Sarah is dealing with her still unresolved feelings for Raven, challenges within her marriage and the fact that as a woman people look down on her and her medical knowledge.

Regular crime readers will not be surprised by the twists in The Art of Dying. But as with the first volume in this series, the crime element is really there to put the characters through their paces and create a bit of movement and interest. In the way of much historical crime fiction the more interesting aspects of this book are the Edinburgh setting, exploration of some fascinating historical characters and events, the illumination of the foundations of some modern medical practice, and the lives of the two engaging protagonists. On these measures, The Art of Dying once again succeeds. 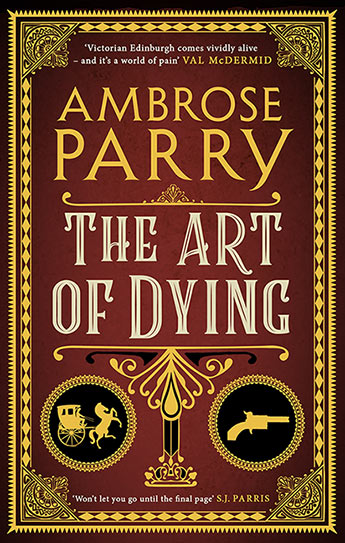