Warrior of the Altaii is/was the never published debut novel of blockbuster epic fantasy novelist Robert Jordan. Jordan is best known, well probably only known, for his multi-volume Wheel of Time series that was so big that it kept turning after his death with the help of fellow blockbuster fantasy novelist Brandon Sanderson. The full series (according to Wikipedia) comes to over 4 million words across almost 12,000 pages. The Wheel of Time is now being turned into a peak TV series by Amazon, because it has a built in fan base, is a fantasy property, and everyone is looking for the next Game of Thrones.

But years before the Wheel of Time, in the mid 1970s Jordan was a wannabe author by the name of James Oliver Rigney Jr., trying to get a sword and sandal epic called Warrior of the Altaii published. The book was well received by publishers but due to a series of circumstances, outlined in the forward to this edition, the book was never published. Instead, this manuscript became a calling card for Rigney who was taken on by Tor to write a series of Conan the Barbarian books in the mid 1980s. From there he moved on to the Wheel of Time, and the rest is history.

Which brings us back to Warrior of the Altaii, finally published over forty years after it was first written. This is a book of its time, based very much in the Conan mould. The main character Wulfgar, is a member of a tribe of “barbarians”, a great warrior and adopted son of the tribe’s “king”. The Altaii are known as barbarians because they are a nomadic people, moving around the Plain, raiding caravans and trading with established city-states. But the world is changing – water sources are drying up and one of the other nomadic tribes has joined up with some local queens to wipe the Altaii out and start a broader war of conquest.

The rest is pretty much what readers in the 1970s might have expected from this type of book. Hyper masculine posturing, plenty of nudity, physical and sexual abuse (of men and women but mainly women), torture, violence and extended battle scenes. The thing to keep in mind, though, was this was a book of its time. If it had been published in the 1970s the cover would probably have featured a buff man on a horse wielding a bow but instead we get the stylish 21st century cover which will not raise any eyebrows on public transport. There are a couple of strong female characters but not enough to make up for the number of usually naked or semi-naked female slaves.

Interestingly, there is more to Warrior of the Altaii, than this. Jordan’s world, despite being sketched out is an interesting one – one in which the inhabitants seem to have come from different realities and times (including a character who seems to have “wandered” in from our world). The world is also much wider than that corner that is explored in this volume, and the action feels like one episode in an ongoing tale, leading to the suspicion that Jordan had a series in mind even with his first book. Wheel of Time fans are likely to find plenty of hints here on the direction that Jordan was to go when he finally developed that series.

The battle scenes are particularly well handled. Jordan did two tours of Vietnam and his understanding of combat, both strategically and viscerally, comes through strongly. It is particularly interesting that coming out of Vietnam, Jordan would write a book in which a scrappy smaller almost guerrilla force takes on and defeats the large established force (and its local allies) using terrain and local knowledge.

But by far the most interesting part of this edition is the foreword by Jordan’s wife (who was also one of his early publishers) about how the book failed to see the light of day despite being well regarded at the time. For all of this though, Warrior of the Altaii is really only a curiosity piece. It is one for those who miss the Conan-style sword and sandal epics of the 1970s or for die-hard Jordan fans who are either completists or are looking for hints of what would later become the Wheel of Time. 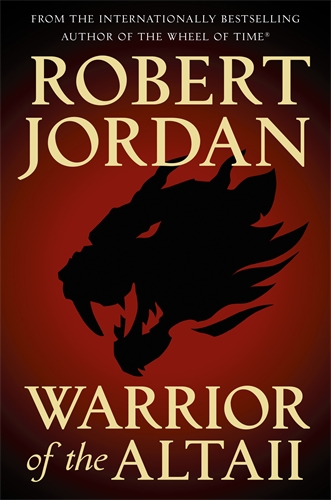