Without reading the blurb, it is hard to know what to expect from a science fiction book titled Velocity Weapon. Presumably there will be someone or something moving quickly and some form of violence, perhaps. What Megan E O’Keefe delivers, however, is intelligent, enjoyable space opera  with engaging characters and intriguing mysteries.

After a major battle, Gunnery Sergeant Sanda is woken from some form of preserved stasis to find herself alone on a strange space ship. The ship is run by an artificial intelligence called Bero who tells her that she has been in stasis for 230 years and that both her planet of Ada Prime and their opposition, the Icarions, were wiped out when the Icarions tried to use a weapon that accelerated objects to near light speeds. The book then jumps back to the war in which Sanda was injured and her brother Biran who is being inducted into the Keepers, an order that maintains the secret of the Casimir Gate which allows interstellar travel and is the cause of the war with Icarion. In the aftermath of the battle Biran takes on the Keeper system and makes a deal with a shadowy organisation called the Nazca to try and rescue his sister, who he believes may have survived. And through all this, in some other location, a thief called Jules comes across a treasure that could get her and her crew killed.

That is the set up. To say any more about the plot would spoil the numerous twists, cliffhangers and reverses. All of the action is anchored solidly by the relatable, engaging and flawed characters of Sanda, Biran and Jules. Sanda, who lost half a leg in the original battle is never less than kick-arse but also compassionate. Biran finds himself swimming with sharks and learning very quickly the art and artifice of diplomacy. And Jules goes on a mission of revenge where she too finds things that she thought were fixed were anything but.

Velocity Weapon builds on the common building blocks of space opera – artificial intelligence, a bit of military action, possibly alien technology and the limits of light speed. But it deploys its tropes in an original way that is underpinned by intriguing world building, enticing mysteries and a narrative style which keeps the pages effortlessly turning. The twists themselves are often hidden in plain sight which makes them more enjoyable when they land. O’Keefe’s style is reminiscent of recent space opera series like John Scalzi’s Collapsing Empire and even, in some ways, James SA Corey’s Expanse series. And after the dust settles, Velocity Weapon leaves plenty of drama to unfold and questions to be answered. It is a great start to what promises to be a great series. 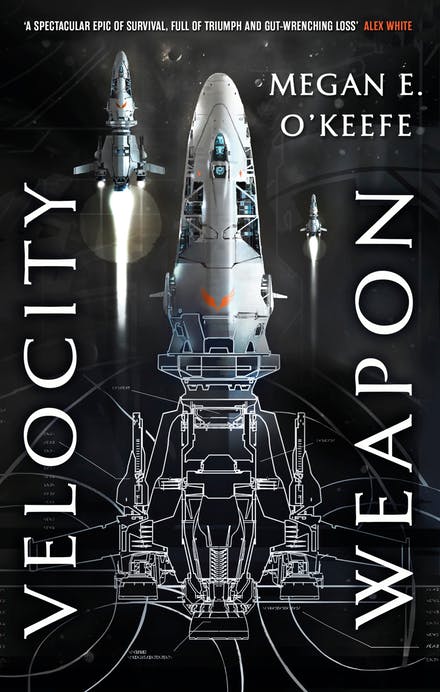