Israeli author Lavie Tidhar gives a fairly lengthy prologue to explain the inception of his most recent book. Back around the turn of the century, Zionists in Europe were looking to Ottoman controlled Palestine as a potential homeland but negotiations stalled. Searching for an alternative solution within the British Empire resulted in a proposal to establish a Jewish homeland British East Africa, land in Kenya that bordered Uganda. The idea split the Zionist movement, with many holding that there could not be an alternative homeland for the Jews. An expedition in 1905 to explore the area and report back did not support the idea and the scheme was rejected. The rest, as they say, is history. In Unholy Land, Tidhar considers what might have happened if that plan had gone ahead.

When the book opens, pulp science fiction author Lior Tirosh (a fairly obvious stand-in for Tidhar himself) is flying back from Berlin to his homeland of Palestina, nestled between Uganda and Kenya. He is going home to visit his ageing father, a famous general from earlier wars. As he arrives the narrative switches and it appears that Tirosh is being followed by local security forces. When it turns out his niece is missing and an old friend dies in his hotel room, Tirosh feels obliged to investigate, slowly falling into the role of one of his pulp novel detectives.

In the history that Tirosh inhabits, Jews established Palestina in the early twentieth century and while there were world wars, the Holocaust never happened. But the tide of history is hard to shake and in this funhouse mirror reflection of our own reality, Palestina has been at war with neighbouring Uganda and Kenya, the army walks the streets of the capital Ararat city where the Jewish population are facing bus bombings from displaced African groups, and the government is building a wall along the border to control the movement of workers. Tidhar digs deep into the parallels and differences between this world and our own.

In Unholy Land, Tidhar tries to have his cake and eat it – he wants to examine an alternate history but also play with the very popular science-fiction standby multi-world theory (books such as The Man in the High Castle by Philip K Dick or Brasyl by Ian McDonald and even the most recent Star Trek series, Discovery are good examples of this). And he pretty much succeeds. Along the way he manages to revel in some pulp fiction tropes as his author/protagonist finds himself living in the plot of one of his novels. That plot revolves as much around the threat to the multiverse as it does around Tirosh’s personal quest.

That mix makes Unholy Land provocative, mind bending and gives it some emotional heft. A combination that, while it does not always work, provides a fascinating and insightful read. 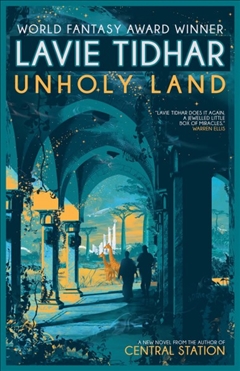