Alex Michaelides’ debut thriller The Silent Patient takes some of its cues from Greek mythology. In particular the story of Alcestis who volunteered to die in place of her husband and was sent to Hades. She was eventually restored to life but following this she never spoke again. When The Silent Patient opens, Alicia Berenson is in a psychiatric ward, locked away for killing her husband. She has not spoken since the gruesome murder, her only communication being a single self-portrait entitled Alcestis. Theo Faber, a psychologist and narrator of this tale is a little obsessed with Alicia’s story and condition and organises himself so that he can treat her.

When The Silent Patient opens, Theo has managed to get a transfer from Broadmoor, where he was working to The Grove, a private institution where Alicia is serving her time. In his narration he is upfront about his motives. After saying he became a psychologist to help people he admits that this is “bullshit”, that he became a psychologist because he himself is damaged and it draws him to working with damaged people – “we study psychology to heal ourselves” he says before chronicling his abusive childhood and personal therapy sessions. As the novel progresses, Theo also starts to recount the breakdown of his marriage and the impacts that this had on him.

Theo takes on Alicia’s case and despite Alicia physically attacking him keeps the sessions going. He continues to question the story told about her and soon starts to push the boundaries of a consulting psychologist. He goes outside the facility to find people who knew her and members of her family. These encounters are juxtaposed with entries from Alicia’s diary which cast a very different light on the characters that Theo meets. The diary entries feel a little too mannered but Michaledis uses them to channel his inner Agatha Christie as everyone that Theo questions turns out to have a motive for destroying Alicia’s life. Whether it is Alicia’s brother who is being threatened by loan sharks and wants her to bail him out or the owner of the gallery that she has always used who has just been told she is moving her exhibitions elsewhere, even a fellow psychiatrist comes into the frame.

In this way, and guided by Theo’s cynical narration, Michaelides builds an engaging mystery. This is a psychological thriller first and foremost. Most of the action happens off the page. What Michalides is interested in is what causes those events or those behaviours and their aftermath. Besides riling up all of those connected to Alicia, as Theo’s investigation continues, relationships with his co-workers at The Grove also start to either deepen or fracture.

Drawing on some classic (and classical) touchstones and techniques, Michaelides has built a taut, page turning narrative, liberally peppered both with red herrings and plenty of clues hiding in plain sight. An accomplished debut thriller.

The Silent Patient by Alex Michalides

The Silent Patient by Alex Michalides 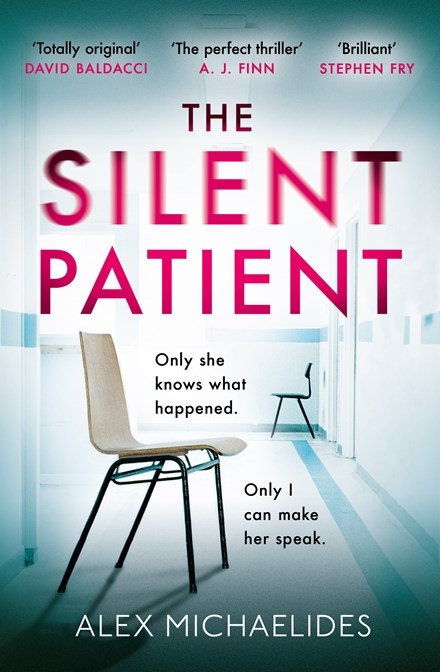