Derek Künsken follows up his mindbending debut The Quantum Magician with something remarkably different in The Quantum Garden. The book opens just after the events of his debut. Con man Belasarius is on the run when he learns that one of his enemies has decided to exact revenge on his whole community, the homo quantus, who live a peaceful life on an asteroid. Belasarius uses the time gates he stole in the previous book to go back in time and mount a rescue mission but this is only the start of his problems.

The Quantum Magician was a challenging debut. Künsken’s universe is complex and it was hard to get a handle on it while also working through the heist plot of that book. With the scene setting out of the way, the sequel is much more focussed and successful. The bulk of the book sees Belasarius and an old enemy going back in time to complete a mission that will allow him to save his people. Being a time travel story it is full of potential paradoxes and moral conundrums for both Belasarius and his companions.

The name of the book comes from a sapient vegetable species (Hortus quantus) that Belasarius discovers in the past. A species that is able to use the time gates to support their intelligence. Unfortunately trying to explain this species shows up Künsken’s tendency to fall back on technobabble:

The Hortus quantus existed like a giant superposition of uncollapsed quantum states. And the nature of their consciousness was quantum. They existed in a kind of natural quantum fugue, without collapsing quantum fields.

Yet, despite this, Künsken manages to develop some emotional depth around Belasarius and his relationship with this new species.

Reducing the cast list from the previous book also helps immeasurably. Besides Belasarius the focus is really only on a handful of other players and they are all fascinating. From the foulmouthed pilot Stills,to Belasiarius’s companion Cassie, to Colonel Ayen Iekanjika who has to grapple with her people’s chequered past, to the Congregate hunter known as the Scarecrow. All, particularly Ayen, get satisfying arcs.

The Quantum Garden takes a massive piece of world building and runs with it. Leaving most of the details in the background, Künsken has crafted a satisfying, sometimes mind bending, time travel thriller with a philosophical edge. The end leaves no doubt that another book is coming in this series, which given the strength of this entry, can only be welcomed.

The Quantum Garden by Derek Kunsken

The Quantum Garden by Derek Kunsken 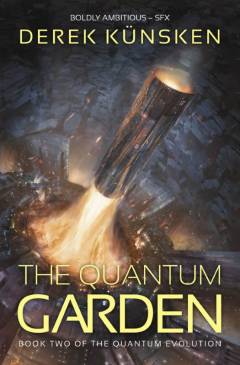