It is hard to believe these days that there was ever a time when there was no market for Australian crime fiction. The strength, the range, the depth of crime fiction coming out of Australia – names like Harper, Robotham, Disher and Fox – are grabbing attention on the world stage. But 40 years ago that was not the case. At that time, Australian author Peter Corris had trouble shopping around his manuscript about a hard-boiled detective walking the mean streets of Sydney. But eventually, in 1980, he found a publisher for The Dying Trade, and in 2017, 42 books later, Australian crime fiction icon Cliff Hardy solved his final case.

In See You at the Toxteth, Peter’s wife Jean Bedford has put together a selection of Peter’s writing. It includes 12 Cliff Hardy short stories, which epitomise not only Corris’s style but how that style changed over time; the previously unpublished An ABC of Crime Writing; and a selection of his columns on crime writing from the Newtown Review of Books. It is, and can only be, a taster of Corris’s prolific output (which besides the 42 Hardy books included another 46 novels and non-fiction titles). But it shows his love of the genre and the ways in which he used its tropes and conventions to deliver stories in a recognisable setting and unique Australian voice.

As Corris himself says, he had a ‘preference for the hard-boiled over the runny-yolked’. And Cliff Hardy is the classic hard-boiled detective, written in the mould of Hammett and Chandler. He is a gumshoe who lives hard, drinks constantly, has an eye for the ladies, is good in a fight and can take a punch or two, but also deep down has a heart of gold. The series of stories that Bedford has selected shows Hardy at his best. He does not always save the day, in fact many of the stories end in some sort of tragedy or down note, but he always gets to the heart of the mystery, no matter the cost to himself or his client. When the collection starts Hardy is already well into middle age:

I was near forty and felt it; I had a house about half paid for, a car not worth a tank of petrol, two guns and some books. I had a lot of scars and some bridge work; on the other hand, no one told me what to do … and most of the bills got paid, eventually. (‘Silverman’)

The stories show Corris’s effective use of the hard-boiled style and the way it developed over time. From the very first, though, Corris captured the tough-as-nails-with-a-sense-of-humour spirit that never went away:

I’ve been in hospital before; the first thing to do is to check that you’ve still got all of your bits and pieces and that they haven’t mixed you up with the guy with gangrene. I moved and wriggled and blinked; everything seemed to work. (‘Man’s Best Friend’)

Following a rule that Corris references in his A-Z of Crime Fiction (A is also for ‘age’), Hardy only ages ‘at one-third the natural rate’, as, it seems, does his trusty Falcon, allowing them both to still be going strong by the final story (‘Break Point’) written 23 years later. This is despite the fact that in most of the stories (and books for that matter), Hardy will at some point be beaten up, knocked out or shot:

They were big and quick; one hit me hard and low while the other grabbed my throat with his big, hard hand. He squeezed and I felt the darkness whipping around me. He eased up and I fought for breath. He squeezed again; the puncher pulled me down so that we were squatting by the car. My knee hit the concrete. The darkness came and went again.

As always, Hardy does not do himself any favours and does not let it go. His style, right from the beginning, has always been to crash through or crash. If there are people trying to hurt or kill him, then that is just a sign that he is on the right track. And, of course, Hardy often gives as good as he gets:

Turk was fast … [but] I had the advantages of height and readiness; I moved aside, reached forward and clubbed his bald head with my metal-loaded fist. The barrel and trigger guard tore his skin and the blow almost stunned him. His knees gave and I chopped at his right wrist, bringing my left hand down hard and bunched. He dropped his gun. I hit him between the eyes with my left hand and felt the knuckles protest. He fell forward and I kneed him in the chest as he came down. (‘The House of Ruby’)

The other main ingredient in the Hardy novels is the city of Sydney and its surrounds. In his A-Z of Crime Writing, Corris has this to say about location:

Some writers are intensely identified with their chosen localities – Dashiell Hammett with San Francisco, Raymond Chandler with LA, Georges Simenon with Paris, Ian Rankin with Edinburgh. Some writers (see R for Research) invent their localities – Ed McBain, Ross Macdonald and Sue Grafton. The only rule is that the localities be interesting in their own right and believable.

There is no doubt that Corris made Sydney interesting in its own right. He celebrated its glitz and its ugliness, its main roads and its back streets:

Blackwattle Bay was an ugly, oily gleam under the dull grey sky and its Glebe shore was a blasted landscape of car bodies, timber and scratchy grass. The view was a long way short of cheerful but there was water in it, it promised better things; it was Sydney. (‘Silverman’)

I’ve heard people talk fondly about Heathcote as an unspoiled place of their childhood; it’s hard to imagine it like that now. The sprawl on the western side of the highway is the standard, sterile red brick horror-land where the garage dominates the outside of the house and the TV set the inside. (‘Man’s Best Friend’)

These stories also give a glimpse of how Corris chronicled the gentrification of the suburbs in which Hardy operated. For example:

Ten-plus years ago … Leichhardt was already gentrifying, with properties turning over quickly as people took their capital gains elsewhere and new residents moved in, renovating and restoring. None of the houses in the vicinity looked like they were owned by old-timers who knew everything that went on in the street. (‘Last Will and Testament’)

In some ways it is best to start in the middle of this collection, with An ABC of Crime Writing. This is a partly serious, partly tongue-in-cheek, slightly reverential and sometimes cutting review of all things crime fiction from ‘A is for Action’ to ‘Z is for Zen’ that until now had not found a publishing home. Through this catalogue Corris shows his deep knowledge of and abiding love for the genre, name-checking the works of a huge range of crime authors along the way, including, among many others, Hammett and Chandler (of course), Poe, Conan Doyle, Christie, Parker, Grafton, Ellroy, James, Disher, McDermid and Rankin. His own work is never mentioned but it is not hard to see how he dealt with the ‘rules’ as he saw them. The entries are full of Corris’s brand of humour. There are plenty to choose from, some have been mentioned above. This is just one example:

E is for exercise. There are no half measures here. Detectives either do or don’t. Robert B Parker’s Spenser does. He spars with Hawk in the gym and, as he says tersely, ‘Lifts some’. Sue Grafton’s Kinsey Millhone jogs to work off the effects of her disgusting fast food diet … Ian Rankin’s Rebus knows he should exercise but has another drink instead; Morse wouldn’t dream of it. At the extreme end is Rex Stout’s Nero Wolfe, who is so obese he can hardly move …

The collection finishes with a selection of columns that Corris wrote for Newtown Review of Books. These columns ranged across a variety of issues, depending on what took his fancy at the time. This volume has just a small selection of those related to crime writing – being reviewed, dealing with editors, the Ned Kelly Awards (Corris was shortlisted listed numerous times for the Ned Kelly Awards and won Best Fiction in 2009 for the Hardy novel Deep Water;he was also awarded a Ned Kelly Lifetime Achievement Award in 1999). The most poignant of these columns is the last in which Corris talks about writing his last novel, Win, Lose or Draw:

So I had no idea this book would be my last when I wrote it and that’s good. Knowing that could have imparted a tone – perhaps regret, perhaps self-pity – wholly inappropriate to Cliff.

Peter Corris was a trailblazer. He turned his deep love of crime fiction into one of the most recognised characters and enduring series in Australian crime. This collection only scratches the surface of his work but it gives great insight into his passion, his knowledge, his wit and the respect he held for others working in the genre. While Corris’s body of work speaks for itself, See you at the Toxteth is a fitting tribute to a writer who truly earned the title of Godfather of Australian crime fiction. 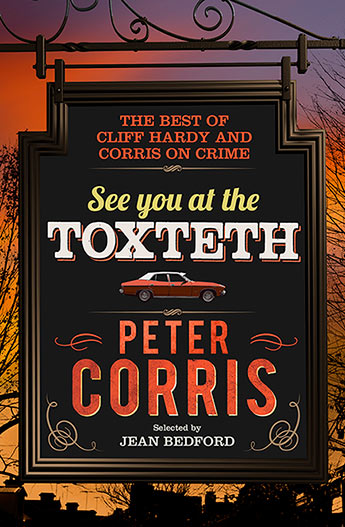