It is hard, when reading the opening of Night Boat to Tangier, not to think of Beckett and in particular Waiting for Godot:

Would you say there’s any end in sight, Charlie?

I’d say you nearly have an answer to that question already, Maurice.

Two old Irish men, Charlie and Maurice sit at Spanish port of Algeciras waiting for the ferries to arrive. They are hoping to catch sight of Maurice’s wayward twenty three year-old daughter Dilly. Dilly has been on the road for three years, travelling between Spain and Morocco. Maurice and Charlie have had word that she should be coming through the port on a particular date and so have camped out there, hoping to see her. And while they wait, they ruminate on their lives:

You know what I got to wondering, Maurice?

Is it as raw a deal as they make it out to be?

Is it not in some way an ease when she comes calling? The Black Angel… Hush now… Listen?… The gentle flapping of her wings… You hearing it?

Are we as well out of it Maurice? Is what I’m asking. With all the bollock-acting that do be going on?

But this is more than just the story of their waiting and their ruminations on life, death and things in between. Barry also tells the story of their lives, as drug runners, as thugs, and their relationship complicated by their feelings for a particular woman – Cynthia, Dilly’s mother. Slowly, their relationship is revealed to be more than just a simple, long term comradeship, but something much more twisted, complex and sometimes brutal. These are hard men, who have had hard lives and are still paying the price.

Barry’s narrative is spare and poetic. He does not glamorise the lives of Maurice and Charlie, they both do awful things, moving between Ireland and Spain due to their involvement with the drug trade:

The city ran a swarm of anchovy faces. The surge of the night traffic ran. The harbour lights were festive and moved across the oily water. He walked as far as the beach of Malagueta to get his head right and let the fear settle. He recognised at once that there was heroin in the vicinity of Malagueta by night. The heavy sea was constrained on tight lines. He sat in the dark on the sand and listened to the night, the traffic; the fast, sibilant hiss of Andaluz voices.

Reading like a cross between Samuel Beckett and Quentin Tarrantino in parts, Night Boat to Tangier shines a light on the lives of Charlies and Maurice and makes them understandable if not exactly likeable. And just when it feels like what little plot there is is running out of steam, there are chapters from Dilly’s point of view and more revelations are thrown into the mix, forcing readers to reevaluate what has come before.

In Night Boat to Tangier Barry effortlessly shifts tone to produce a book that is in turns tragic, comic, contemplative, threatening violence and wistful. It is a lyrical tale about some very unpleasant people and that in itself is a triumph. 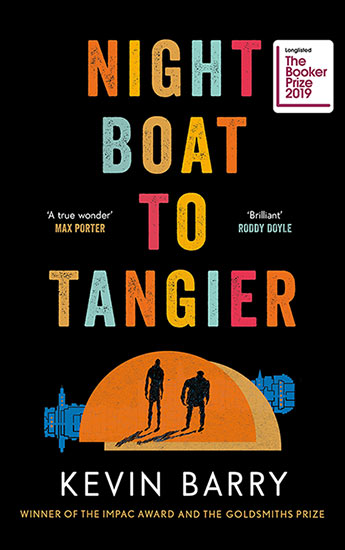