Award winning Australian crime author Candice Fox returns to steamy North Queensland and her damaged but fascinating pair of Ted Conkaffey and Amanda Pharrell for a third outing in Gone by Midnight. This one is a locked room mystery, of sorts. But greater interest, as with the previous
Crimson Lake and Redemption Point, lies in the main characters and their struggles to live something approximating a normal life.

Four boys left on their own in a hotel room while their parents have dinner downstairs. They are checked on once an hour but at midnight, when the parents have finished up one of the boys, Richie Farrow, is missing. Conkaffee and Pharrell are employed by the boy’s mother to work alongside the police. She employs them because she believes in Conkaffey’s innocence and feels that he will be on her side if suspicion falls on her. From the first moment the pair clash with the police, who still believe Conkaffee is a paedophile and unfairly still blame Pharrell for the death of one of their colleagues.

While there are other point of view characters, the focus of this book is once again Ted Conkaffee. Not only having to help solve a crime but also look after his three year old daughter on her first visit. Having been separated from her since she was a baby due to the charges against him and suspicions that he is what he was charged to be, Conkaffee has to relearn what it means to be a father. Luckily he has some help from friend Val who agrees to babysit and even, to some extent from Pharrell. This new role adds urgency to his need to find the missing boy. Conkaffee, ex-cop, once again brings his procedural mind to the case.

Meanwhile Pharrell has her own problems. A rogue policewoman is targeting her, blaming her for the death of her former partner and riling up her colleagues. Pharrell has her own, sherlockian deductive form of investigation which puts the police offside but is uncannily effective.

The mystery at the centre of Gone By Midnight does not work quite as well as previous books in this series. The red herrings are a little too obvious and the ultimate solution not quite as watertight. But none of that really matters, Fox has once again crafted a page turning thriller that effortlessly combines a head-scratching mystery with the personal travails of her main characters. 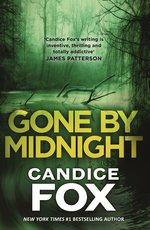