Australian author Corey J White exploded onto the science fiction scene with his first Void Witch novella – Killing Gravity. That all-action story focused on void witch Mariam ‘Mars’ Xi, who has extreme telekenetic powers and is taken in by a group of scrap traders when pursued by the authorities.

Void Black Shadow opens not long after Killing Gravity ends. The challenge for White is what to do with a character who (spoiler alert) has just used her mental powers to literally destroy a whole armada of space ships.  He does what many writers in this situation do – he starts by creating a more powerful enemy (in this case Borg-like hive-mind cybernetic soldiers called The Legion) and then finds a way to take away Mars’ powers. Mars loses her powers as for a while as she gives herself up to get into a moon-sized prison to try and rescue Mookie, one of her comrades from the first book.

Mars once again is the centre of this story. And while she has a few moments of introspection she is really defined by her actions. And she is constantly in action. Even when she has her powers stripped from her she manages to cause plenty of trouble in the prison population.

There was an opportunity after Killing Gravity for White to slow things down and explore the universe that he has created a bit more fully. But that is not this book. Instead, White doubles down on the action and the pace with plenty of battles and scenes of psychic destruction. Not that there is anything wrong with that, but the broader universe is still a bit of a mystery. Void Black Shadow once again scratches an itch for pacey, big budget space opera and is just the right length to be devoured in a single gulp and leave readers both exhausted but waiting for more. 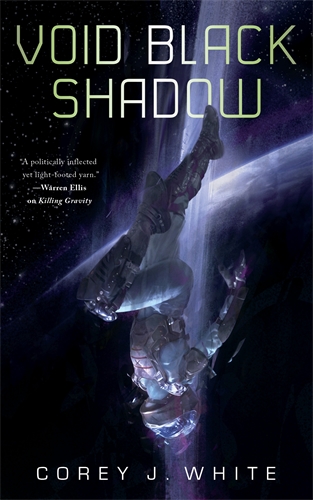