The characters in Deborah Sheldon’s new horror novella Thylacines had clearly never read or seen  Jurassic Park. Scientist Rose Giuliani works in the Resurrection Lab at the usually sleepy Fraser University outside of Melbourne. Rose and her team have brought the extinct thylacine, or Tasmanian tiger, a marsupial carnivore extinct since the 1930s, back to life through DNA extraction and cloning. This work has actually been postulated in real life by Professor Mike Archer, formerly of the Australian National Museum. But, as readers (and viewers) of Jurassic Park already know, bringing extinct species back to life is an endeavour fraught with risk.

Rose has managed to raise a successful litter of five thylacines. But even she admits that these are not ordinary thylacines. They are more than twice the size of the original animal and super-aggressive.  At the same time as a visit by representatives for the company that funds their research, a group of incompetent animal libbers break in and manage release the animals. The groups collide, the animals escape and it quickly turns out the super-thylacines really enjoy the taste of human blood.

The rest is mayhem, cliffhangers and gore. There are more Jurassic Park echoes as the thylacines act remarkably like velociraptors from the movies. The group of super-predators quickly adapts to hunting in a pack, setting up cunning ambushes and generally ripping unsuspecting humans limb from limb for no other reason than… they can. A group of unlikely heroes, including 60 year-old scientist Rose, Glenn the animal keeper and Janine, female cop with Zeus her trusty German shepherd sidekick, try to hunt the rogue thylacines down as the body count rises.

While there is nothing new here and few surprises in terms of the plot beats, Sheldon’s prose moves at a good clip and this an engaging, if bloody diversion. In the end, though, readers’ enjoyment of Thylacines will depend on how much they enjoy this type of B-movie style monster rampage. 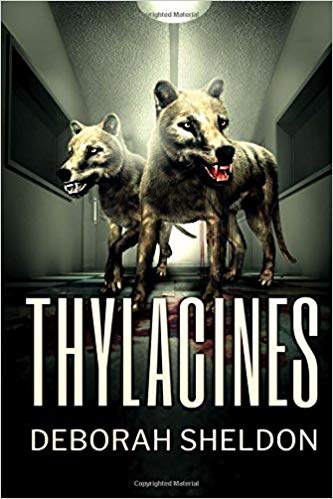