Richard Morgan returns to science fiction after a bit of a break with a sequel of sorts to his last scifi outing Black Man (called Thirteen in the US). That break has seen the Netflix adaptation of his best known scifi work (and debut) Altered Carbon. Those who have read or seen Altered Carbon might find themselves experiencing a strange sense of déjà vu when reading his latest book Thin Air.

Hakan Veil is an overrider. Genetically engineered from before birth to be a supersoldier, he is forced to spend four months of every year in hibernation. When he emerges from that state he “runs hot”, prone to anger and violence. When Thin Air opens, Veil has just been woken and is on an assassination mission in the nightclubs of Mars. Veil was decommissioned from the overriders and exiled to Mars where he makes a living working for underworld figures. Mars is a frontier world, riddled with gangs, corruption and vice, a milieu that Veil slots into perfectly.

At one level Thin Air is a crime story and political thriller although it takes a long time to get there. Veil is assigned to one of the auditors who has come from Earth to clean up Martian corruption. Madison Madekwe is looking into the disappearance of the last man to win the Martian lottery, a scheme that gives one lucky Martian the opportunity to go back to Earth. But when Madekwe herself is abducted and an attempt is made on Veil’s life it turns out there is a lot more going on that just a missing, presumed dead lottery winner.

Thin Air is classic Morgan, using a formula that does not seem to have changed much over the years. Veil solves every problem with violence – fists, big guns and knives – a sparky AI companion called Osiris and, where necessary, pornographically described sex. He relies on a range of friendly or slightly antagonistic allies including a couple in the local police force. He is able to get out of a bunch of life threatening situations using his on-board technology and by violently killing plenty of people, usually given the time to set everything up because his assailant can’t help monologuing.

Space as a frontier town is an idea science fiction readers have been treated to in spades recently. Books like Ian McDonald’s Luna, Andy Weir’s Artemis and Chris Brookmyre’s Places in the Darkness are good recent examples. Morgan’s Mars has a cyberpunk, run down, lived-in feel complete with a range of political actors and locations built into the Martian landscape. Given its potential impact on the Martian population then, the ultimate mystery itself should create more tension. But in the end it just feels like a vehicle for escalating encounters for Veil and it is hard to care about the outcome for the Martian people one way or the other.

As noted above, while there is no “sleeving” and the background is Martian, there is plenty about Thin Air that is reminiscent of Altered Carbon. It is no stretch at all to imagine Joel Kinnaman, who played Takeshi Kovacs on screen, taking the role of Hakan Veil. Similarly plenty of the side characters, including the cocky hacker, policewoman with a heart of gold and head of a Martian crimegang, could easily be played by their Altered Carbon equivalents.

Fans of Morgan and his muscular, ultraviolent, hypersexualised, cypberpunk style are likely to be fine with Thin Air. But Hakan Veil quickly outstays his welcome, the plot takes a long time to pick up speed and in the end is not all that engaging, so any broader appeal is likely to be limited. 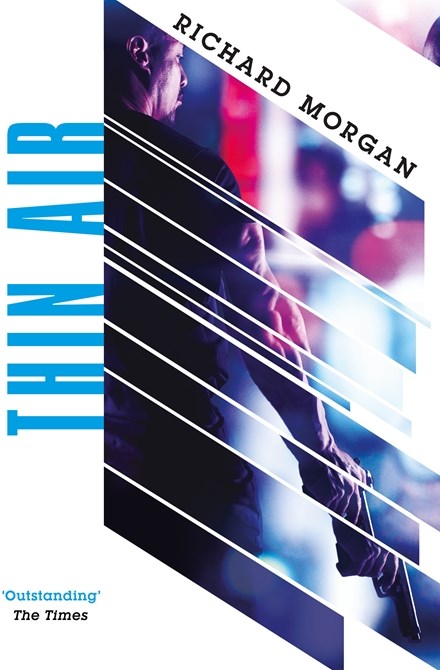