Enter another conflicted, sparky girl onto the YA fantasy stage. Joining a recent slew of female fantasy heroes in books likes of The Last Namsara, Children of Blood and Bone and Caraval, Mary Watson brings another spin. Set in a modern day Ireland but referencing an ancient feud, The Wren Hunt is wholly original even when it treads some familiar story beats.

Wren Silke is an augur. Like many a YA protagonist before her she was not raised by her parents. Her father is unknown and her mother abandoned her as a baby. The augurs, one of a cast of magic users, are in an ongoing war with the judges. Wren has been recruited into that war, picked to be the augurs’ spy into the judge stronghold and to steal a map that will help tip the balance in their ongoing war.  But this is not quite the quest novel that it sounds. It reads more like a spy novel where the protagonist is a trainee spy and her handlers are using her to play much larger games.

Wren herself is a likeable, conflicted heroine who has to chart her own course when the world shifts around her and alliances and friendships turn out not to be what they at first seemed. Thrown into the mix, not surprisingly, is a love interest, who happens to also be the head of judge security. As to be expected: lies, revelations, heartbreak, and other relationship roadblocks abound.

The underlying Irish mythology is fascinating (the wren hunt is an actual traditional event that takes place on the day after Christmas) and the otherwise normal, present-day setting feels like a breath of fresh air. The Wren Hunt is another great addition to the growing ranks of girl-powered YA fantasy. It is likely to be irresistible to its target audience but able to be enjoyed more widely. 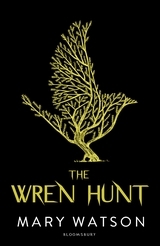