Adam Roberts never does the same thing twice. While he has written novels with a crime element it is safe to say that The Real-Town Murders is something completely different again. It is a locked-room mystery but in the nature of all good crime novels, the murder is about something much deeper. But that something is connected to a heightened version of our current connection to technology, the freedoms that we give up to interact with that technology and the influence that that might bring to various players.

The Real-Town Murders opens with an impossible murder. A body has been found in the boot of a car that was built by robots. Private detective Alma is brought in by the company that runs the factory to investigate. The process of the car’s construction was fully captured by camera and shows that there is no way for the body to have been placed in the boot before it was discovered. But in the way of all good noir detective novels, Alma is then bought-off and removed from the case by the authorities before she can investigate too deeply. When she finds there are deeper forces at play, she gets drawn back in.

A couple of aspects of this tale make it stand out. The first is the milieu – the future Britain portrayed is one that is mainly silent. The majority of people live in a virtual reality world known as the Shine. Alma occasionally runs into bodies being “walked” by mesh suits to keep them exercised while their owners consciousness is elsewhere. The second is Alma herself who is locked into a regime where every four hours she must treat her partner Marguritte for a man-made disease that will kill her if Alma herself does not understand and apply the correct treatment. This timeline puts an edge on every situation that Alma finds herself in over and above the usual strain of shadowy government agents trying to kill her.

But above all else is the fun that Roberts has with the genre and the language. The text is littered with references, quotes and call backs to famous crime and science fiction film and novels from North-By-North-West to The Hitchhikers Guide to the Galaxy. This from an informant who, in a nod to All the President’s Men, Alma dubs “Derp Throat”:

“Are you a common-or-garden paranoid, or one of the more refined sort?” [Alma asks]

“I’m the paranoid who knows. I’m the individual people should be paranoid about. I spend my days surveilling people and keeping the state happy. I’m not the paranoid. I am the one who paranoies.”

And it turns out there is plenty to be paranoid about. Alma never really knows who to trust or why as the plot branches out into deeper conspiracies and a behind-the-scenes war. But Roberts even manages to flip this, with a satisfying resolution of his locked car mystery and an even deeper conspiracy hanging in the background.

The Real-Town Murders is packed to the brim with crime and thriller tropes, science fiction concepts, word play and philosophy. If nothing else it demonstrates Roberts’ range and depth and his ability to cherry pick from across the genre spectrum to deliver something original, engaging and thought-provoking. 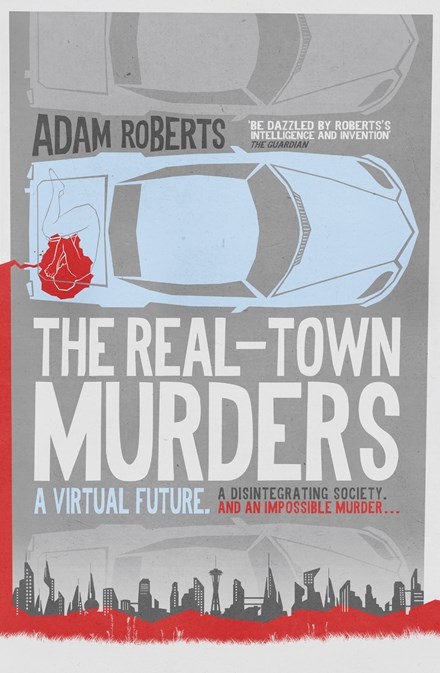