The Night Market is the third in Jonathan Moore’s triptych of dark tales set in San Francisco. The first, The Poison Artist was psychological gothic horror. The second, The Dark Room, was a more down the line police procedural with decidedly creepy undertones. After the more straight forward narrative of The Dark Room it was interesting to consider where Moore would take this series. And he does not disappoint. The Night Market is something else again, a vaguely dystopian science fiction crime thriller, set in a recognisable day after tomorrow San Francisco. Once again there is a police investigation at the centre of the tale. But in this story, nothing is quite what it seems.

Homicide investigator Ross Carver and his partner are called to a murder scene in a wealthy area of San Francisco. The dead body is like nothing they have ever seen but before they have a chance to investigate the FBI turns up and they are hustled from the building and roughly disinfected. Carver wakes up three days later with no memory of the events. His neighbour has been caring for him and despite little previous contact, offers to help him find out what happened during those missing hours.

To say much more about the plot would spoil some of the twists. But as with his previous novels, those twists come thick and fast and continually force the reader to reevaluate everything that has come before. But Moore also has a message in this tale. This is also a story about rampant consumerism, about our modern addiction to our devices. As with The Dark Room, there are deep, institutional forces at work seeking to maintain a status quo that benefits the rich and powerful.
Once again, Moore captures the spirit and darkness of San Francisco, the fog rolling in off the bay, and the steep divide between the haves and have nots. But in this future world, everything is heightened. The bad neighbourhoods have become worse as scavengers rip copper wiring out of the street lights. But these areas are being let go by the city so they can be torn down and redeveloped. The police force is becoming an increasingly thin blue line as the city seems to teeter on the edge of anarchy.

The series of books, of which this is the final, has been deliberately written to be, as Moore describes them, a triptych. The three are only very loosely connected and there is no need to read them in any particular order. Each has a very different style and a different, dark take on San Francisco. The Poison Artist is still the most effective of the three but The Night Market definitely matches it in the creepiness stakes and all three books are worth diving into. 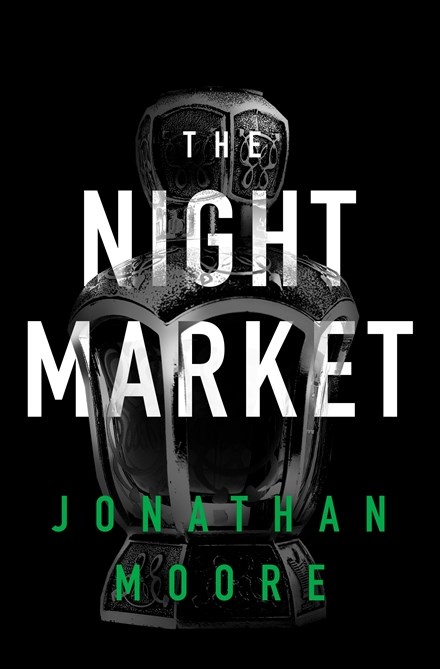