Mario Vargas Llosa is one of the great chroniclers of life in South and Central America. This was recognised with the Nobel Prize for Literature in 2010. So it is no surprise that it he has returned to the bad old days of his native Peru for his latest novel The Neighborhood. What is a surprise is the prurient, telenovela, over-the-top style of the plot and the lack of depth to the many characters who circle around the plot. And the feeling that this is a novelist who still has an axe to grind.

The Neighborhood opens in Lima in the 1990s during the second term of president Alberto Fujimori (who defeated Llosa himself in the previous election). Life is tough – people are being kidnapped, there is violence on the streets and the secret police, led by a man known only as The Doctor, are flexing their muscles. As one character observes:

‘With all these blackouts, bombs, kidnappings and murders every day, who can live peacefully in this city? In this country?‘

Llosa uses his scenario to delve in and around the streets of Lima. From the houses and offices of the wealthy few to the dangerous neighbourhoods and soup kitchens where people are struggling to get by. This description as one character walks through an area called Five Corners:

It was still early, but since robberies and muggings had increased a great deal in the neighborhood, the shopkeepers already had their grates up and waited on customers through a slit barely large enough for small packages to pass through. Half-built houses and filthy alleys with a single water tap, vagrants and beggars on the corners that, at night, filled with drug dealers and transient prostitutes, their pimps lurking in the darkness.

This is juxtaposed with the lives of the rich business people who live in luxury and pop over to Miami for weekends. But his real target is a corrupt government that allowed this situation to develop and an uncontrolled press with freedom to smear that government’s political opponents.

The narrative has three distinct endings. The first in Llosa’s signature style is a lengthy chapter of interlaced dialogue, cutting between all of the main characters to tie a bow on the plot. The second, in case readers did not get the point, is a newspaper-style recitation and revisit of the crimes and corruption that flourished under the Fujimori government. And the third, entitled “Happy Ending?” jumps forward three years to life after the regime has been brought down which, for the wealthier protagonists of this tale, does not seem to have changed overly much (still plenty of sex, less fear of kidnapping, perhaps).

The Neighborhood is not Llosa at his best. While it does provide a window into Lima of the time it is also an angry book, using broad descriptions and extreme events to make his point. 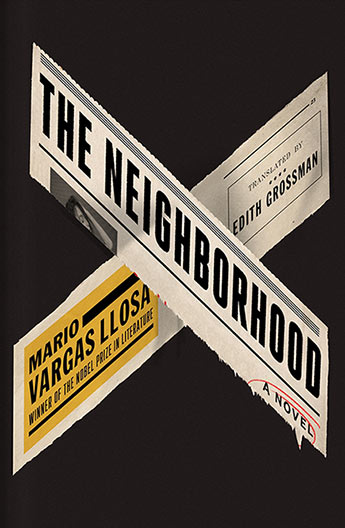