It has been over 65 years since Asimov published the first of his Foundation series in which a group of scientists come up with a plan to save a dying galactic federation. While the Foundation trilogy is seminal science fiction, many readers these days find it a bit of a slog. John Scalzi’s Interdepency series takes a similar premise but has given it a modern spin in the vein of contemporaries like James SA Corey, Ann Leckie and Yoon Ha Lee but with his own brand of verve and wit.

The Consuming Fire picks up not long after the end of The Collapsing Empire. The flow lanes, which connect the planets of the Interdependency and are necessary for their survival, are shutting down and the route to the one planet that might sustain survivors is blocked. While the first book concerned itself with the discovery of the impending end of everything and for that reason sometimes felt like a lengthy prologue, this book gets down into the consequences of knowing that the Empire is under threat and exploring how people respond to that knowledge.

The book opens with the emperox, Grayland II, announcing that she has had visions of the end of the Empire. Much like the founder of her empire/religion, Rachela, Grayland is using this method to sell something that she feels her people are otherwise unlikely to believe. But the idea of their supreme ruler having visions sets the hares running among the elite in the trading houses, military and church. There is soon a new wave of competing plots to unseat Grayand, some from within her own family. Meanwhile, the scientists who have been able to map collapsing flow lanes find that some new lanes are also temporarily opening. They take one of these temporary lanes to a long cut-off solar system, giving them insight into former collapses and a whole new perspective on their Empire.

The Interdependency series is modern space opera at its best, and The Consuming Fire has all the features that set The Collapsing Empire apart. The characters are flawed but likeable, the dialogue and observations are snappy and the action, when it comes, is propulsive. There are plots and counterplots, double crosses and triple crosses and plenty of other twists along the way. Most importantly Scalzi manages to make the exposition and technobabble a joy to read.

And it is not hard to see deeper considerations beneath the surface. The Empire’s impending collapse and the forces arrayed against dealing with it feels like a corollary of the current climate change debate. Only in this case, someone with some power and foresight actually wants to do something about the problem in the face of mercantile and political opposition. A key part of that opposition is the power-hungry Nohamapetan family who had their own scientist advising them of the collapse but forced her to bury the information and then tried to use it for their own financial gain.

When The Collapsing Empire came out, it was not clear whether this was going to be the first of a two book series or something longer. The sequel, The Consuming Fire answers that question emphatically. Not only does Scalzi not wrap up the series, he manages to seed a bunch of new threads and plot lines. So that while this could easily sit as the perfect middle book of a trilogy, the story could now successfully extend well beyond even a third book. 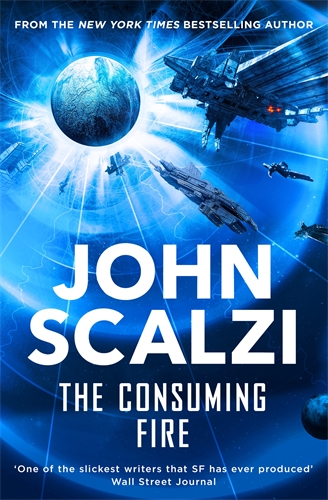