Sarah Gailey burst onto the speculative fiction scene with her spectacularly original debut novella River of Teeth. In alternative late 19th Century America that Gailey built, hippos that had been imported to the country in the 1850s have become a source of food and a means of transport in the swampy American South. That book was a heist caper involving a group of outlaws and miscreants up against a bigger bad guy and ended, literally with a bang.

Gailey takes up the narrative with protagonists scattered and thinking each other dead. Being the second book in the series, she does not need to bother with much of the world building which allows Taste of Marrow, still a novella and not much longer than River of Teeth, to be a slightly richer experience that can  deepen the story that began in the earlier volume.

Taste of Marrow is, like its predecessor, a lot of fun. There is not a lot that is deep and meaningful here and it still not long enough to really dig into the characters. But at novella length, it is a quick, tasty morsel of a book. A Wild West adventure full of killers and ne’er do wells, cliffhangers, an even more moustache-twirling villain than the previous book and, of course hippos. 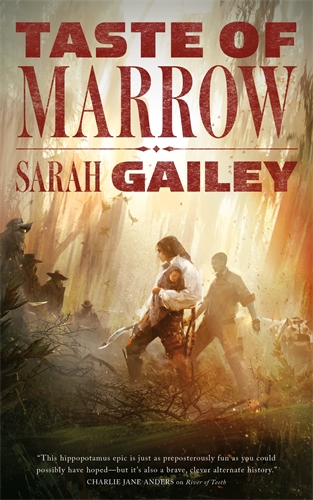