Award winning Canadian author David Bergen’s new novel Stranger takes readers on an odyssey from Guatemala across borders into the United States. Along the way he looks at issues of Western exploitation, illegal immigration into the US and global inequality. But he does this in the frame of what is often a heartbreaking, beautifully observed tale of a mother’s quest to regain her child.

Iso Perdido works at a fertility clinic in Guatemala. Women come from the West for treatment there based on the lake’s supposed powers to promote conception. The clinic is also used as a way of providing unwanted Guatemalan children to wealthy couples who cannot conceive. Iso starts an affair with Eric, one of the (married) doctors at the clinic and becomes pregnant. But before she can do anything about the pregnancy, Eric has a serious accident and is taken by his wife back to the US to recouperate. When her baby is born, the clinic tricks her into selling the baby to the doctor and his family and sends the baby to the US, The rest of the tale is Iso’s journey to the US to infiltrate the gated community in which the doctor and his wife live to try and reclaim her child.

While Iso is not looking for a new life in the US, Iso joins a group of immigrants travelling through Mexico into the US. Later she becomes one of the illegal cheap labour force working as maids and groundskeepers in a gated community. Bergen does not shy away from the harshness of these choices and this life and many of the stories around Iso are tragic.

Bergen focusses in this book on the disparity between developed and developing countries. Even the relationship between Iso and Eric is a microcosm of this. In a reflection on their relationship, Iso reaches this conclusion:

She looked into his eyes, but he was busy eating. They saw the world in different ways. For him, life was like a story that had answers, or a conclusion that made sense. For her, the story was sinuous and unclear, and if there was happiness to be had, it might arrive unannounced, or it might land in the arms of another person.

Bergen also draws stark distinctions in the landscapes of Iso and Eric. When Iso is in America she looks out the window of a bus and sees:

Stranger is a beautifully written, issue rich, deeply affecting book. It takes important subjects and deeply humanises them not only in the character of Iso but in the characters of those she meets on her journey. Critically, it ensures that it impossible for readers to see Iso as “the other” but as a rounded character with hopes and desires that have a right to be fulfilled. 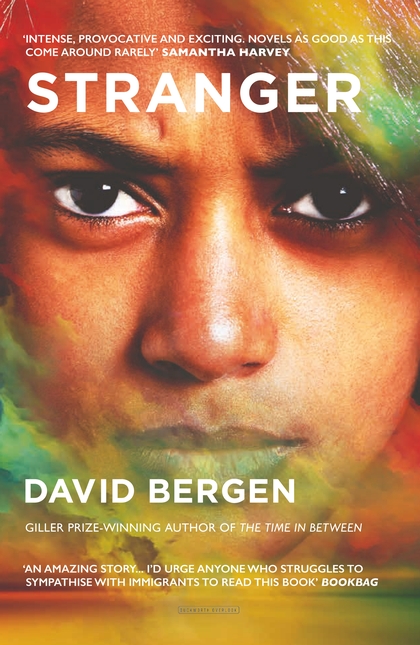