Back in the age before television, one of the most popular forms of entertainment was the radio serial. People would sit around their radios listening to dramas being acted out with sound effects. And now it seems, the art has come full circle. Podcast drama, essentially the modern day version of the 1930s radio serial, is the perfect medium for speculative fiction where the big budget special effects all happen in the head of the listener. There are plenty of great science fiction and fantasy podcasts out there – a few that make best-of lists include Welcome to Night Vale, Limetown, The Bright Sessions and Alice Isn’t Dead. Some of these have become so successful that they are branching our into other media. For example, there are now two books set in the Night Vale universe and a mooted Bright Sessions tv series in the works.

Steal the Stars was the first dramatic podcast developed for Tor Labs. Created by writer Mac Rodgers it told a story that included a secret alien spaceship being studied by a powerful military contractor, forbidden love between security personnel and an almost impossible heist carried out at huge personal cost. Steal the Stars the book by Nat Cassidy, much like many movie novelisations, does not stray very far from this source material.

The book is narrated by Security Chief Dakota “Dak” Prentiss, who also narrates the podcast. Dak has a strong narrative voice and the novel form allows Cassidy to delve a little deeper into Dak’s history and thought processes. But in relying on this first person narrative, Cassidy fails to take a more interesting route to get more into the heads of all of the other key characters including Dak’s lover and co-conspirator Matt, Dak’s second in command Patti and geek-scientist Lloyd. Even in the novel, some of the actions and motivations of these characters are a little opaque when seen only from Dak’s point of view.

Unlike the Night Vale books, which broaden its aural world, Steal the Stars does not add much to the experience of listening to the podcast. And in comparison the novelisation, while often fun to read, feels a little flat. 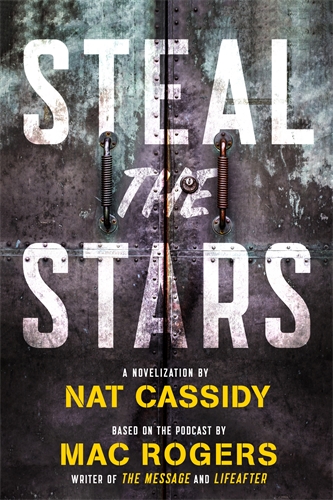