Rural seems to be the new black in Australian crime fiction. Far from the gritty Melbourne backstreets or white collar crime of Sydney. And rural crime is definitely getting some recognition. From books like Jane Harper’s multi-award winning The Dry and Garry Disher’s Bitterwash Road through to two of this year’s Ned Kelly Award Best First Crime shortlist nominees – Wimmera and The Dark Lake. Into the fray comes Chris Hammer’s first fiction outing Scrublands, much like The Dry, a book that announces itself by its title as reflecting a part of Australia that most Australians have never seen but would like to feel a connection to. And Hammer has the chops – a long time journalist, he has set his debut fiction outing during a lengthy drought in southeastern Australia, a milieu that he investigated in his non-fiction first book The River.

Scrublands opens with a shocking crime. One Sunday morning, out of the blue, the local priest in the small Riverina town of Riversend opens up with a rifle and kills five of his parishioners before himself being killed by the local policeman. Rumours of child sexual abuse lead to the crime being written off by the world as “perverted priest tries to prevent his secret being revealed”. But readers know there is more to the story and PTSD-ridden journalist Martin Scarsden, who comes to the town a year later to do a “how is the town coping” piece, quickly realises the same thing and starts to investigate. But then more bodies are found, unfounded allegations are aired, and Martin, who reports on all of this before the rest of the media swarm on the town, finds himself in the centre of the story.

There is plenty to like about Hammer’s tale. The crimes that come to light are multilayered and interconnected and Hammer holds back his reveals carefully. The town itself is a composite of ‘typical’ towns of that region and is well described (but just in case, the book comes with a map to help readers picture the layout). And Hammer’s portrayal of the media and the media cycle, the hand-in-glove relationship between the media and the authorities and the different attitudes of print and televised media, particularly feel spot on. Besides exploring the plight of towns in drought and their communities (an issue that is well on the radar of Australians again at the moment), Hammer also checks in on hot button issues like the drug epidemic, police corruption, media ethics and even the war in Afghanistan.

But there are also problematic elements. The novel is overstuffed with incident, stretching the plot out and requiring lengthy sections of exposition and explanation as all of the pieces are put together. The central relationship between Martin and the much younger, beautiful and impossibly named Mandalay Blonde (a number of names are pointers to character or physical features, possible bad guy Harley Snoutch is another) feels a little too much like wish fulfilment. Some of the ways in which Martin gets access to information, even if he is a journalist, are questionable (although this is a problem/failing of many books featuring non-police investigators). And while many of the characters work, there is some awkward characterisation, particularly of the backpacker killer (once revealed).

Scrublands is another good example of one major direction in which Australian crime fiction is headed at the moment. Although, given the high quality of some other recent efforts in this subgenre, it feels like it is coming a little late to the rural crime party. But Scrublands’ accessibility makes it more likely it will herald an even greater explosion in the burgeoning Australian rural crime fiction scene. 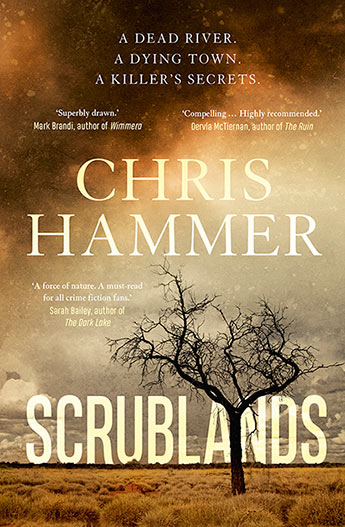