In Becky Chambers’ previous Wayfarer books she has taken some standard science fiction tropes – space truckers, galactic confederacies, aliens, artificial intelligence – and given them a thoughtful and humanist spin. In Record of a Spaceborn Few she does the same again, this time tackling another scifi standard – the generation ship. While it is set in the same universe as the previous Wayfarer books and there are some tangential connections, Record can easily be read as a standalone.

Many generations ago, humanity packed up its collective belongings and fled a crumbling Earth in a fleet of thirty-two generation ships headed to parts of the galaxy unknown. Following contact with advanced alien species, the Exodan Fleet parked itself around a star and humanity slowly spread out again. While no longer travelling, the Fleet remained, as did much of its population, continuing to live the way their ancestors did (with a little alien technological assistance).

Record follows a group of characters aboard one of the remaining Fleet ships. They are of all ages and from all walks of life. Chambers uses these characters to dig deeply into Exodan society and in particular the constant tension between development and tradition. They go through trials that will be recognisable to any reader  – wanting to grow up too fast, raising children, moving to somewhere new, finding meaningful work. And their tribulations, while very personal, are empathetically observed and made more interesting by their well realised context.

Record of a Spaceborn Few once again confirms Chambers as a unique voice in science fiction. There are  no space battles, no great alien mysteries, no shocking twists. Just a deep exploration of the human condition, and a new spin on the generation ship narrative. 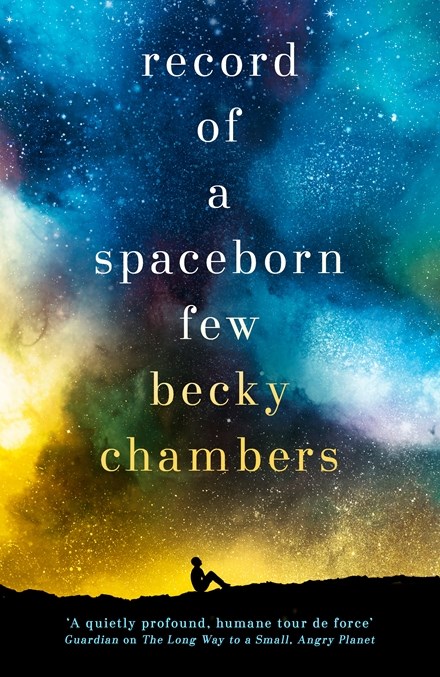