Space is the final frontier. So it is no surprise that fictional towns in space – on the moon, on space stations on generation ships – are portrayed as frontier towns. And usually not in a positive way. Recently Ian McDonald’s Luna series portrayed a fairly lawless lunar colony run by dynastic families and Andy Weir’s protagonist in his recent Artemis, also on the Moon, makes a living running contraband. So when Places in the Darkness begins and new security chief Alice Blake is told that mankind’s first space station is totally crime free, the reader knows there is more to it. That and the fact that the book has opened with parts of a dismembered body floating in zero gravity.

Nicky “Fixx” Freeman is part of the local Seguridad but she moonlights as a fixer. Collecting protection money and helping a local alcohol smuggler and enforcer as part of a local gang war. Because mankind’s first space station, Cuidad de Cielo (“City in the Sky” or CdC) is riddled with corruption. A state of affairs to which the four ruling corporations (known as the Quadriga) turns a blind eye. But the locals know that the global government might be interested, given that the CdC is also where the first generational star ships, the hope for humanity, are being constructed. A blatant murder, followed by the opening shots of gang warfare puts Nikky in the frame and Alice, a representative of the global government, on the case.

Scottish author Chris Brookmyre is much better known for his gritty, often tongue in cheek crime fiction novels many featuring investigative journalist Jack Parlabane. He brings much of that sensibility to Places in the Darkness. Brookmyre understands that crime fiction is a great way to dig under the surface of a society. The only issue here is that he needs to do a fair amount of setting up and exposition (including a full on lecture early on) to get to the point where he can start digging. So much so that early on this feels like two different novels shoehorned together. But this feeling quickly subsides. And much of this is due to the characters – Nikky Fixx, an ex-LA cop who is carrying around an ancient pain and has become part of a completely corrupt system and Alice Blake, the straight-laced investigator having her eyes opened to how the world really works.

There is plenty going on here and it takes a while for Brookmyre to put all of the pieces into place. But once he does this becomes a classic buddy cop adventure (in space) as the situation spins dangerously out of control and repercussions of failure become more serious. Plenty of cliffhangers, clues and action. And along the way, also a fair amount of contemplation of issues like the nature of consciousness, how societies operate and what constitutes free will.

In the end it does not matter whether this can be considered science fiction with crime genre stylings or crime fiction set in a science fiction universe. In fact what it displays is the limitations of bothering at all with genre. Places in the Darkness is a great read, period and recommended for crime readers, scifi aficionados or just anyone who likes a good book. 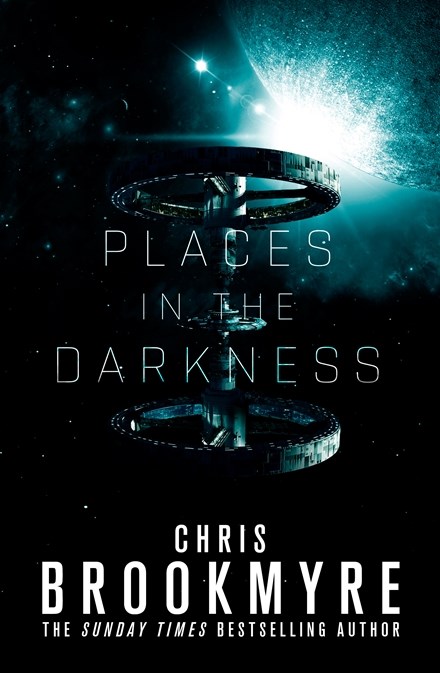