Being the seventh book in the series this review will contain SPOILERS but as this is one of the best space operas going at the moment, if you are not on board yet, perhaps it is time. With The Expanse TV series paused somewhere in the middle of Book 2 (Caliban’s War), authors Ty Frank and Daniel Abraham, aka James S A Corey, have taken the book series in a new slightly new direction.

Persepolis Rising begins with what can only be described as a bold time jump. This volume takes the story thirty years forward from the end of Babylon’s Ashes. Given the ruin and destruction that reigned at the end of that book this is a sensible call. It finds James Holden and the crew of the Rocinante (and the ship itself) older and more grizzled but throughout this volume the intervening years are only vaguely sketched out. The most you can say is that their little family (XO Naomi, pilot Alex, psycho engineer Amos, ex-marine Bobbie and ex-killer Clarissa) have become even more of a tight family-like unit.

The conflict here comes when radical ex-Martian Duarte returns to the solar system with enough alien tech to take over. Most of the action, and there is plenty of it, takes place on the occupied Medina station, with detours to the wider situation in the solar system through Drummer, now head of the ex-Belter Transport Union.

While this is the seventh book of the series it is the first of what is supposed to be a concluding trilogy. In this respect, despite all of the action and cliffhangers and carnage, this volume feels like Corey resetting the table. That does not mean that it pays to come in cold as there are plenty of familiar characters and callbacks to earlier books. Unsurprisingly for fans of the series, Persepolis Rising is a page-turner with the same humanist, politically savvy, action filled engine as its predecessors and a killer ending that will have readers hanging out for the next volume. 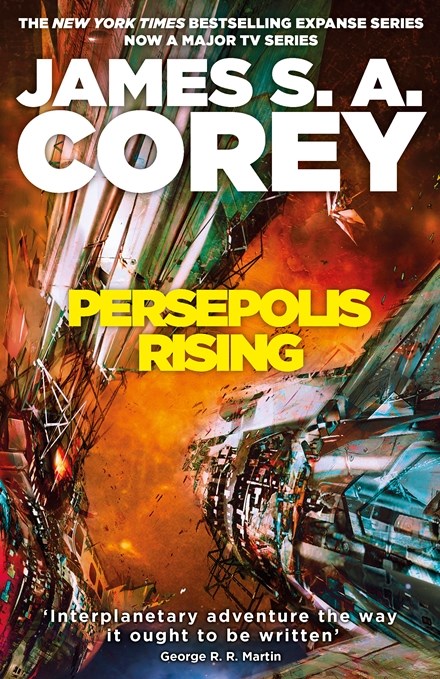