Fans of the PC Peter Grant (now promoted to Detective Constable or DC Peter Grant) series, a police procedural and fantasy mash up with its tongue firmly in its cheek, rejoice. While there was a long break between books 5 (Foxglove Summer)and 6 (TheHanging Tree) of the always enjoyable Rivers of London series, book 7, Lies Sleeping, has come round fairly quickly. For those who have not yet engaged with this series, this is not the best place to start as it effectively wraps up the story line which started in the first book Rivers of London (or Midnight Riot in the US).

When the book opens, DC Grant and his boss DI Nightingale, previously the last wizard in England, are hot on the heels of Martin Chorley, known as the Faceless Man, their nemesis and architect of chaos around London. Given the destruction that has already been wrought by Chorley, they are now part of a much larger police operation, which has its advantages and risks. Tension mounts and every attempt to catch the Faceless Man or foil his plans, while slowly getting them closer, ends in some form of tragedy or set back, as the series itself builds to a final epic confrontation.

Once again, the world weary, slightly sarcastic and cynical narration of DC Grant is a joy. Plenty of historical information about the city of London and its gods and spirits but also picking at English class distinctions. And of course, plenty of references to geek touchstones including plenty of Tolkien and some deep Doctor Who cuts.

Having resolution in sight for some extremely long running mysteries and conflicts, allows Aaronovitch to pull out all stops in terms of action (magical and otherwise). But he still manages to work in plenty of character development, be it Peter’s ongoing relationship with river godess Beverley, or an extended scene where he has to interact with a mute elf called Foxglove. And throughout, the diverse and enjoyable side characters also get plenty to do.

There are plenty of easter eggs for fans of the series. This includes not only callbacks to events and characters from the previous six books but also references to the 2017 novella (The Furthest Station) and Rivers of London graphic novels also written by Aaronovitch. For more casual reader, these references do not detract from the story but provide additional colour and movement from a universe that gets more detailed by the book.

While Lies Sleeping brings the long running overarching narrative of the Rivers of London series to a close,there are still plenty of hanging threads and character developments that scream for further investigation. And there is no doubt that fans of this series will be up for it. 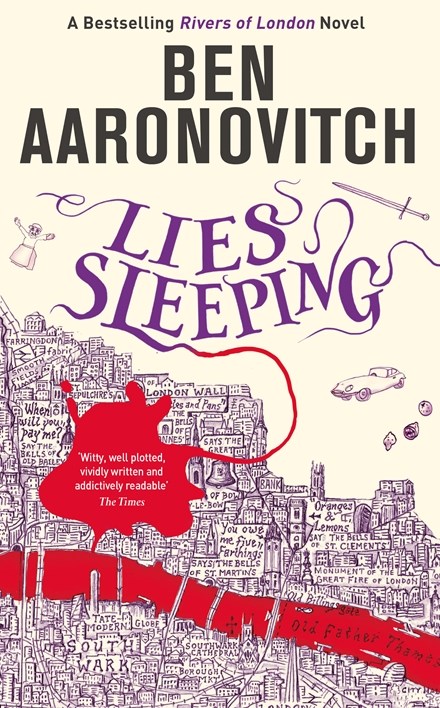