The rise of the popularity of true crime podcasts and tv shows has not gone unnoticed in the fictional world. The fact that journalists or entertainers are reviewing settled court decisions and, through their interpretation of the evidence, putting pressure on lawmakers to reconsider these cases is a situation ripe for drama. This year already we have had Charlie Donlea’s Don’t Believe It and now we have Benjamin Stevenson’s debut Greenlight. In both cases, a documentary maker exploring a cold case becomes a little too close to their subject.

Greenlight opens with an intriguing cold open, cheekily headed “Cold Open” (in fact the chapter structure and names are taken from the fictional series, including a final, twisty “Mid-Credits Sequence”). A woman called Eliza has been held in a cellar of some kind for an indeterminate length of time when something strange starts to happen and walls of her cell appear to start bleeding. Cut to the present where producer Jack Quick is wrapping up the last episode of his TV series which casts doubt on the conviction of Curtis Wade, accused of murdering Eliza whose body was found on his vineyard. When Curtis is released and his defence laywer dies in the same way as Eliza, Jack has a crisis and heads to the little wine town of Birravale to try and set things right.

One of the fascinating aspects of Greenlight is its exploration of the true crime industry. How the popularisation of the criminals and their exploits has potentially turned everyone into a media star – “each hopeful for their own part to play in the national pantomime that true crime podcasts and TV has turned the justice system into”. Because this is fiction, there is a definitely mystery here and nothing is quite as it seems. But Stevenson also makes alot of mileage out of the impact that Jack’s series has had on the town, the police who he smeared in the series, and on his own relationships in his pursuit for ratings and fame.

The other unique aspect of Greenlight is the character of Jack Quick. Quick suffers from bulimia, a rare condition in males and closely associated in Jack’s case with a childhood trauma. This means that Jack is constantly fighting his own personal demons while also desperately trying to do the right thing by other people. Quick’s battle with his mental illness and its physical effects and his relationship with his father and brother add real depth to this thriller.

But in the end, Greenlight is predominantly an Australian rural crime thriller and in this respect it stands up well. Set in the wine district a few hours from Sydney, Stevenson is able to explore the dynamics of these small communities that are so tied to the success of this particular agricultural/tourist industry. The mystery is well handled and while keen crime buffs will probably guess some of the twists this is because Stevenson plays fair with his readers and keeps much of the solution of the various mysteries in plain sight. He skilfully manages the red herrings and action scenes to keep readers off the scent.

Fitting neatly in a growing rural noir subgenre, Greenhlight manages to explore issues that go beyond place in ways that are both interesting and which impact organically with the plot. It has already been a bumper year for great Australian crime fiction debuts (including The Rúin and The Nowhere Child being just two examples) and Benjamin Stevenson’s Greenlight is just continuing that trend 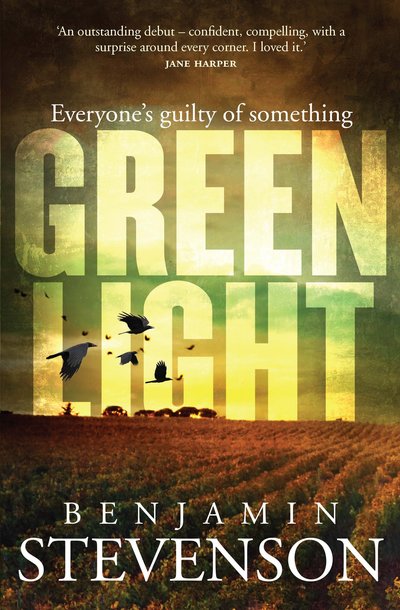