Ghost Wall, the sixth book by British author Sarah Moss, is as short and sharp as a flint knife. The book is a coming-of-age tale that explores the power of the past to inform and drive action. Along the way, Moss deeply questions the Brexit movement and gender power dynamics.

Ghost Wall opens in prehistoric times, with the death of an Iron Age woman at the hands of her tribe. Cut to almost modern day, sometime not long after the fall of the Berlin Wall, and teenage Sylvie and her parents have joined a university project conducting an experiment in living archaeology in the Northumbrian countryside. The aim of the project is for the family, along with the professor and his three young adult students, to live as far as possible as people did in the Iron Age. As Sylvie observes:

… that was the whole point of the re-enactment, that we ourselves become the ghosts, learning to walk the land as they walked it two thousand years ago, to tend our fire as they tended theirs and hope that some of their thoughts, their way of understanding the world, would follow the dance of muscle and bone. To do it properly, I thought, we would almost have to absent ourselves from ourselves, leaving our actions, our re-enactions, to those no longer there. Who are the ghosts again, us or the dead?

Camped in the shadow of Hadrian’s Wall, an area of forests and peat bogs, they wear burlap tunics, eat gruel, forage for greens and catch rabbits and fish. Some sleep in a hut on straw (the students stay in tents). Moss’s feel for the landscape brings this experiment alive. It is not hard to picture the little encampment, the nearby creek, or Sylvie leading the students on foraging expeditions in the forests or to the coast. Or when the students take her through the same woods  for sneak visits back to civilisation in the form of a  local supermarket.

Within a few days our feet would wear a path through the trees to the stream, but that first night there was moss under foot, squashy in the dim light, and patches of wild strawberries so ripe and red they were still visible in the dusk, as if glowing.

Cracks start to appear in the group, and as each of them buys into the re-enactment, the tension increases. Sylvie is caught between the students, whom she idolises, and her strict, often violent father, who uses the experiment as a justification for his intensely patriarchal views.

While set in the early 1990s, Ghost Wall feels like a post-Brexit book in that Moss is exploring the mindset that drove people to vote to leave Europe. Sylvie’s father is looking at the Iron Age as a place of pure Britishness, corrupted over time first by the Romans and then by waves of other foreigners:

Dad didn’t like the Irish, tended to see Catholicism in much the same light as the early form of Roman imperialism. Foreigners coming over here, telling us what to think. He wanted his own ancestry, wanted a lineage, a claim on something. Not people from Ireland or Rome or Germania or Syria but some tribe sprung from English soil like mushrooms in the night …

With no evidence, he believes that he is connected to these early inhabitants of the island:

Right, said Pete, you mean he likes the idea that there’s some original Britishness somewhere, that if he goes back far enough he’ll find someone who wasn’t a foreigner.

Sylvie also has to deal with domestic violence. Emboldened by the Iron Age experiment, what starts off as old-fashioned chauvinism quickly reveals itself to be violent control. A state of affairs Sylvie has become habituated to, even accepting that if she is hit it is her fault:

Unless he found some other reason; some days I just knew he needed to hit me and however carefully I trod, sooner or later I’d give him cause …

The professor and his students, caught up in the experiment, are either oblivious or refuse to act upon the violence in their midst. Sylvie’s mother sets an example of meek acceptance of her fate:

… It just doesn’t seem very fair, that’s all [Sylvie said]. Life isn’t, [Sylvie’s mother said], which was what she always said. Mustn’t grumble, can’t be helped, nothing to be gained by making a fuss, well you wouldn’t want to make trouble, would you?

And over time,  as they start to accept the patriarchal interpretation of the experiment, many of the participants not only ignore the inherent violence but contemplate how they can experience it.

The ghost wall of the title is a woven wall of sticks adorned with skulls. It is in the construction of this wall, and the related obsession with the sacrificial practices of the Iron Age people that Sylvie’s father and the professor share, that Moss starts to ratchet up the tension.

In Ghost Wall Sarah Moss manages to walk that fine line between childhood innocence and adult knowledge. Sylvie understands more than she pretends to, hiding truths from herself but revealing them through both her actions and the words and actions of others. This is a multilayered tale where the underlying issues inform but never overwhelm the story, making it both a violent coming-of-age story and a cautionary tale for those looking to the past for a steer on the future. 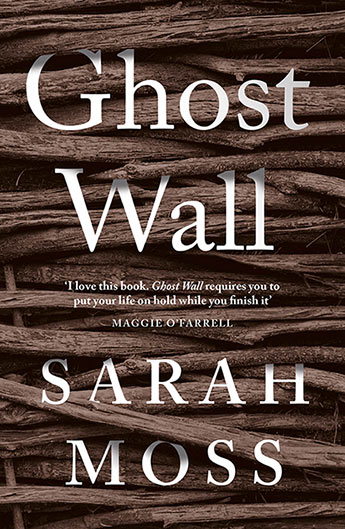