Anthony Horowitz, famous for a bunch of properties including Midsomer Murders and Folye’s War as well as the YA Alex Rider series, has already dipped his toe into the James Bond world. In 2015, with the blessing of the Ian Fleming estate, he released Trigger Mortis, a Fleming-style, era-specific, Bond set after the events in Goldfinger. Trigger Mortis was fun and clearly won the approval of the Fleming estate as they commissioned Horowitz again, this time looking a little earlier in Bond’s career.

Forever and a Day is the story of James Bond Pre-Casino Royale. It is, in effect, a James Bond origin story. In the age of prequels, it is perhaps unsurprising that Horowitz has taken this route. But the question has to be asked whether fans really need to know why Bond takes his martini shaken not stirred. But the challenges of prequel writing are not the biggest issue for Horowitz. The hard part for a book of this kind is navigating Fleming’s 1960s views while still delivering something that does not feel hopelessly dated.

Once the preliminaries are dispensed with this is a typical Bond thriller. All of the elements are in place – wealthy setting in the South of France, moustache twirling villains with a dastardly scheme, and a femme fatal with a secret who falls for Bond’s charms. And while the plot beats are absolutely predictable, Horowitz has not only great affection for them but delivers them in a way that feels fresh. Whether it is a prequel or not, readers know that Bond is not going to die in a Bond book, but Horowitz manages to ratchet up the tension anyway.

Forever and a Day is rollicking adventure probably best for Bond fans, but there are plenty of these. And unlike some of the more recent books and movies which bring Bond into contemporary time, Horowitz once again demonstrates that Bond and his actions and attitudes probably fit more comfortably in the world of the 1960s. 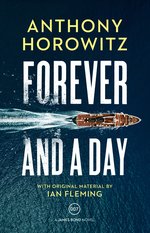