How do you follow up a globally celebrated, multi-award winning debut like Jane Harper’s The Dry? Well, if you are Jane Harper you do it by trying not to do the same again. She follows her main character, Aaron Falk, from The Dry, but she puts him in the middle of a situation that could not be more different and in doing so draws on another Australian literary archetype – the lost bushwalker.

Aaron Falk works for the financial crimes section of the Australian Federal Police. But he is drawn into the search for a lost bushwalker as she happens to be his prime informant in a money laundering case the police are building against an establishment family firm. The woman, Alice Russell, was on a corporate team building exercise with a group of other women from the firm including the sister of the CEO. The women get lost and Alice separates from them, seeking her own way out. But Harper makes clear right from the opening paragraph that Alice was not liked (or missed) by any of the other women.

Harper intercuts Falk and his partner’s investigation with the story of what really happened on that ill-fated bushwalk. This allows for the slow unfolding of a number of plot threads that go well beyond the initial financial investigation including the potential involvement of the son of a serial killer who operated in the area many years before and the activities of the teenage children of some of the hikers. Each of these plot threads make it a little more baffling as to why it is Falk and his partner from financial crimes who are investigating rather than state police.

Harper brings a deep feeling for the landscape. Unlike the drought-affected farming country of The Dry, here she explores the eucalypt-filled rocky wilderness of the South-Eastern Australian bush. She manages to capture both the beauty of the landscape and the ease with which walkers, particularly inexperienced walkers, can become disoriented. There is a thread in Australian literature of people have been getting lost in the bush, a famous example being Joan Lindsay’s Picnic at Hanging Rock. Harper draws on this tradition and on a more contemporary fear, that associated with serial killer Ivan Milat, who buried his young victims in forest south of Sydney.

But Harper’s real focus, once again, is her characters. She spends a lot of time with the five women on their disastrous hike, their motives and drivers. Interestingly the missing woman, Alice, is only ever seen from one of the other womens’ point of view. She is a mystery to them and remains a mystery to the reader. This also makes it difficult to care about her and her plight. And Harper digs a little deeper into the psyche of Aaron Falk in particular his relationship (or lack of relationship) with his father, a connection which constantly threatens to be relevant to the plot but never quite gets there.

While not quite as compulsive, Force of Nature exhibits all of the strengths that Harper demonstrated in The Dry. The narrative, like all good crime, is a means to explore a range of social issues including corporate malfeasance, adventure team building, bullying (by young and old) and modern parenting. But Harper does all of this through a well constructed mystery and the lens of vivid and often familiar characters. 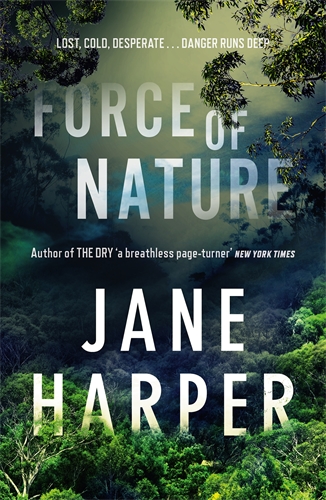