Evacuation is the second novel by French/Israeli author Raphaël Jerusalmy. Actually more of a novella, it takes as its background a war in the Middle East and a threat to Tel Aviv that leads to a decision to evacuate the city. The story is narrated after the emergency has ended. Naor, a young filmmaking student is driving his mother from his father’s kibbutz in the north of the country back to Tel Aviv.

The story itself focuses on how Naor, his girlfriend Yaël and his grandfather end up staying in the city after its evacuation. When the busses come, Yaël and Naor’s grandfather simply refuse to leave, the bus departs with all of their belongings and the three set up in an apartment owned by Naor’s friend who is in the army. The narrative then is their exploration and lives in the empty city. Naor, being a filmmaker, starts to make a film of their experience.

There is plenty of post-apocalyptic styling to this tale. The need to live without power or running water, looting local stores for food and clothing, the hint of other “survivors” just out of view, and a constant threat of missile attack. But this is more of a love letter to the city of Tel Aviv as the characters visit famous sights and art galleries. As Naor observes:

It’s true that there is something chauvinistic about Tel Avivians. Separatist, even. We can give back a lot of things: The Golan Heights, the Samaritan Hills, the Sea of Galilee… But under no circumstances are we giving up one inch of old Tel Aviv…

Jerusalem is too demanding. Too holy. It takes over your soul. I’ve never really felt at ease there.

Tel Aviv is much more accommodating. Reassuring. It’s a sanctuary where Israeli’s themselves find refuge, whether they’re Jewish or not. Where the restaurants open late. Where you refuse to define yourself according to a conflict.

Evacuation is, for the most part a gently observed, and deeply felt tale of three disparate characters living through unusual times. While there is a war going on around them, the characters avoid thinking about it, immersing themselves in the business of living. But when bombs are falling, tragedy is always just over the horizon and Jerusalmy does not shy away from this. This telling is almost to short to explore all of the consequences, but it manages, like a good short story, to deliver a well placed gut punch that will ask readers to re-evaluate the narrative and their response to it. 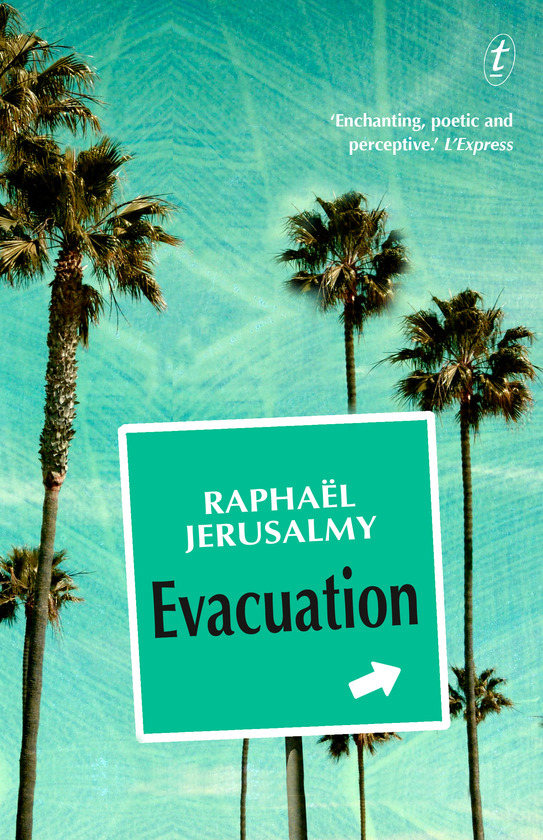