The Empire of Ashes is the final book in Anthony Ryan’s Draconis Memoria trilogy so there may be mild spoilers ahead. The Empire of Ashes delivers more of what series fans would have enjoyed in the previous two volumes – a heady mix of steampunk, quest, and politics in a well realised world threatened by an implacable dragon army. The plot supercharged by the powers given to a select few who can drink the blood of dragons. And most importantly for page turning purposes, Ryan manages to deliver a series of continually cascading cliffhangers.

After a very brief introduction which will only make sense to series regulars, Ryan catches back up with his four main characters, all of whom had been left in some form of peril or distress. Adventurer Clay, fresh from a bizarre subterranean adventure but with new information and an ally who could turn the war; kick-arse intelligence agent Lizanne leading a ragtag group of refugees; mutinous captain Hilemore who has put the safety of his world above his commission; and Silas, one of the “spoiled” – humans magically converted to follow and unquestioningly obey the vengeful White Dragon that is gathering an army to take over the world.

Ryan manoeuvres these characters across his world: chasing macguffins, building alliances, marshalling forces, inventing new devices and weapons and fighting dragons, as he builds to a massive finale. The Empire of Ashes has plenty of action but also uneven and the final battle takes a ,long time coming. But it is an epic set piece involving huge armies and taking place on land, in the air, on sea and in the mindscapes created by blue dragon blood. Ryan delivers a satisfying conclusion to a series that effortlessly mashes steampunk and fantasy in a believable world driven by a page-turning plot. 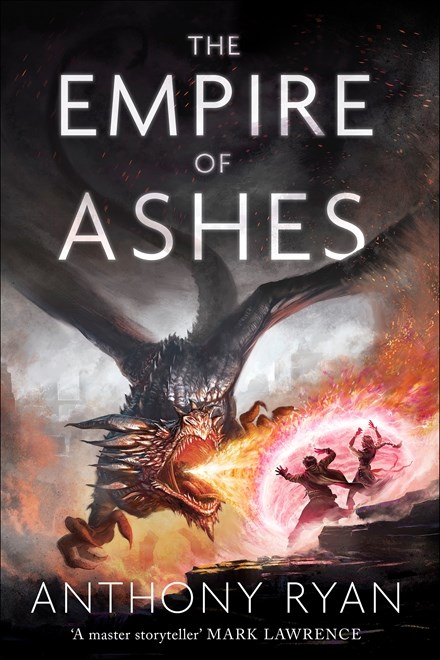