Charlie Donlea turns his attention to true crime in his latest stand alone thriller Don’t Believe It. He takes the public’s fascination with podcasts and tv series that forensically investigate old crimes and often reveal problems with the prosecution and turns it into a page turning story of crime and possible redemption. Along the way the narrative asks readers to consider how much of these series are as much a construction of the facts to make a particular case as the original prosecution might have been.

In 2007 someone killed Julian Crist on the Caribbean holiday island of St Lucia. Julian had been there with his girlfriend as part of the wedding party for old friends Charlotte and Daniel. Suspicion immediately fell on his girlfriend Grace Sebold who was arrested, convicted and sent to prison on the basis of forensic evidence. Ten years later, Sidney Ryan has produced three series in which she cast serious doubt on the convictions of long term prisoners. She agrees to take up Grace’s case and pitches a “live” TV series to the network she is working with. The idea is that the series will be aired week to week and the audience will learn the information simultaneously with the production crew. After four episodes, as problems with the original evidence begin to pile up, the show becomes a monster hit. But Sidney soon learns that while the prosecution may have been botched, not everything might have happened as she is portraying it either.

Coming off the success of programs like Making a Murderer and podcasts like Serial, Donlea taps into the true crime zeitgeist with this thriller. And he does this consciously, these and other similar series get namechecked and discussed throughout the narrative. The idea that a crusading documentary maker, with time and resources on their side can reveal holes in the original prosecution case and impact the lives of those convicted is an inviting one for audiences. True crime investigations like this take the tropes of the crime novel, where everything is neatly tied up, and turns them on their head. Although in this case, being fiction, Donlea is able to provide some definitive answers, in his usual twisty fashion, and even if they don’t necessarily provide a comfortable resolution for his characters.

Sidney Ryan is a great guide to this world. A fierce advocate for the truth, she is also battling with and against the tv network that is paying her bills. So that when the story begins to play out in ways that diverges from her portrayal of it, the stress begins to show. And her ongoing battle with chauvinist, old hands at the station while trying to establish her own personal brand is well handled. Thrown into the mix as a fairly vital side character is forensic pathologist Livia Cutty, fresh from her star turn in Donlea’s last unputdownable thriller The Girl Who Was Taken. This and other references, broaden Donlea’s “universe” while leaving this book as a standalone.

Ironically, St Lucia is similar to the fictional island of St Denis, the setting for the long running BBC cosy murder mystery series Death in Paradise.  But Don’t Believe It is anything but cosy. The tension is constant and it is another great, page turning thriller from Donlea. Much like the millions of viewers of Ryan’s serial, readers will be itching to get to the next twisty revelation, they just won’t have to wait a week for the next instalment. 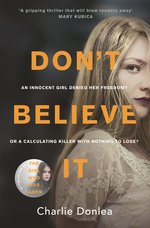