Tim Baker’s debut novel, Fever City, was a fantasia on the assassination of John F Kennedy. His follow up, City Without Stars, takes a very different tack and while still historical to a degree is a little more contemporary. Set in 2000, on the Mexican side of the US/Mexican border, Baker’s new novel takes on the drug trade and all of the attendant misery and corruption that surrounds it.

Baker’s novel opens with a murder. This is the latest in what turns out to be an extremely long term pattern of women abducted, raped and murdered around the town Cuidad Real. And there are plenty of women around as they come to the town to work in the cheap sweatshops called maquiladoras. These sweatshops, often owned by foreign interests are the exploitative underbelly of NAFTA. Cuidad Real is a border town so it is also a centre for drug smuggling into the United states.

Baker tells the story of this town through a number of main point of view characters who circle around each other. Fuentes, seemingly one of the only non-corrupt policemen in town, desperate to stop the murders. Pilar, working to unionise the workers in the factories and improve their conditions. Ventura, abandoned by her lover when he is threatened by the narcos, seeks out a famous local author to help her tell the story of the factory workers. And El Santo, local narco boss, constantly looking over his shoulder as opposing cartels close in.

Following the recent Sicario, and with the next season of the Netflix series Narcos looking to explore the Mexican drug cartels, this is clearly fertile ground for fiction. And Baker makes the most of it. Much like those other portrayals of societies beholden to the drug trade, there is plenty of unflinching violence. But in focussing mainly on those trying to make a difference despite the seemingly insurmountable forces arrayed against them, there is also plenty of heart.

City without Stars is a confronting, suspenseful and engaging novel. It effectively captures the hardscrabble life on the Mexican side of the Mexico-US border. Corruption and exploitation abound, creating a nearly insurmountable obstacle for those who wish to do something to help the oppressed. And while Baker effectively exposes and explores these problems he does not provide any easy answers. 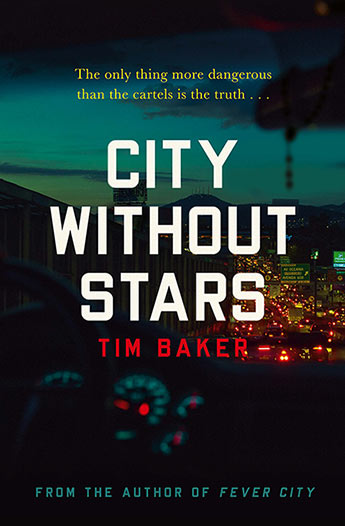