Attica Locke’s Pleasantville, the sequel to her nominated debut novel Blackwater Rising was one of the standout crime novels of 2015. It went on to win the Harper Lee Prize for Legal Fiction in 2016 and was long-listed for the Bailey’s Prize for Women’s Fiction. That book centred around race, politics and crime in Houston. In her latest book, Bluebird Bluebird, Locke moves away from the urban and well into the rural. The majority of the action set in the little East Texas town of Lark where it seems the more things change, the more they stay the same.

Darren Matthews has followed in his uncle’s footsteps to become a Texas Ranger. The Texas Rangers are a highly respected, statewide police force in Texas. But few in the force are black and this creates challenges for Matthews and the work that he wants to pursue involving the Aryan Brotherhood of Texas. When the book opens, Matthews has turned in his badge but is convinced by an old friend in the FBI to take a look at two murders in Lark, the first of a young black man from Chicago and the second of a young, female local a few days later. He is given a short timeframe to investigate and permission to wear the badge. Matthews is not surprised to learn that the police are investigating the second murder and not the first and that local black community members are in the frame. When he arrives in town he finds not only the wife of the murdered man looking for answers but a community divided strongly on racial lines but deeply connected by shared history.

In Bluebird Bluebird Locke digs deep into the psyche of her State, of the fraught relationships between the white and black populations, the history that underlies that relationship and the pervasiveness of racism in every conversation, action and decision. Matthews, her protagonist, understands these divisions and continually butts against them in his search for the truth. This in itself creates a huge amount of tension in a situation that is tense enough to start with.

Bluebird Bluebird is top notch crime fiction. Locke once again uses the genre – both the crimes themselves and the way in which they are investigated – to shine a light on the society in which they occur. Matthews is a classically strong, resourceful but conflicted and compromised character and Locke never lets him off the hook, particularly in a finale which leaves both him and the readers dangling. 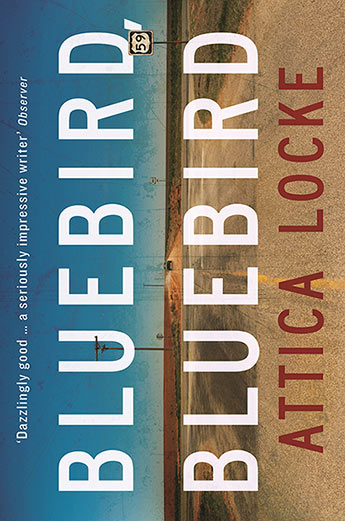