John Fairfax is a pen name of William Broderick, a crime novelist who won a Golden Dagger for his first novel The Sixth Lamentation, the first of his Father Anselm crime fiction series. Whether to differentiate that series from his new one or just because he could, Broderick has taken a pen name for his new series, the first of which was Summary Justice. That book started the story of William Benson, imprisoned for murder, now released and at the English bar, defending murderers in the Old Bailey.

Blind Defence opens a couple of years after Summary Justice. Benson’s practice has not flourished since his first case. Even Tess de Vere, the solicitor who briefed him and, as a law student, encouraged him in prison to study law, has been pressured by her firm not to send him cases. But then comes a case where the accused asks for Benson by name and he has a chance to try and defend his second murder.

Diane Heybridge was found hanging in her flat. All of the evidence points to her ex-boyfriend Brent Stainsby but Stainsby is maintaining his innocence. Neither Benson not Tess like Stainsby but they are committed to the rule of law. Before long it turns out that there may be more to this case than a simple question of murder or suicide. At the same time, Richard Merrington, Secretary of State, is keen to keep pursuing a vendetta to drive Benson out of business, having failed previously. And Tess is determined to reinvestigate the murder that Benson was accused of, convinced of his innocence.

This is a great British courtroom drama. Fairfax, a lawyer, captures the activity in the courtroom, including the cut and thrust of the examination and cross examination in both a realistic yet, clearly made-for-literature way. The plot twists and turns expertly, each new revelation exposing a deeper view of the events both as they are known and as they are portrayed in court.

But this is character-driven crime fiction. Benson, troubled ex-con with a past he is trying to get past, a secret benefactor, a group of loyal friends and who only really comes alive before a jury, is a deep and interesting character. As are the supporting cast of Tess de Vere, Benson’s staff, ex-cell mate Archie and Polly and even the Merrington family. Merrington in particular gets some great scenes in which he considers the greatness of being British.

There is no need to have read Summary Justice before reading Blind Defence. Fairfax gives enough backstory to allow this volume to stand pretty much on its own. However, having read it first, it is a book that is likely to make readers want to go back to the first volume and catch up in more detail more on Benson’s backstory and exploits. And there are plenty of unresolved issues and secrets left to keep Benson and de Vere going for a while yet. 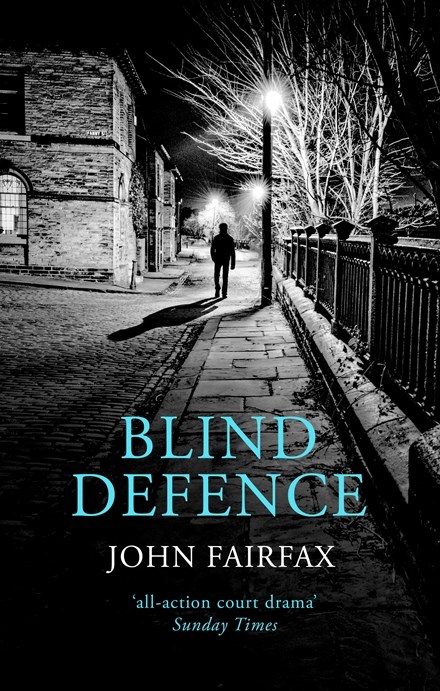