Before the release of her debut novel, Annalee Newitz was better known as one of the founders of io9 and wrote about new technologies. So she is well placed to craft a futuristic scifi novel that even set one hundred and twenty odd years from now, still feels like a natural extrapolation of where we are today.

Judith “Jack” Chen is a biological pirate. She takes drugs manufactured by the big pharma companies, reverse engineers them and produces cheaper copies for those in need. She operates from a submarine that moves her between manufacturing centres in Northern Africa and her home base of northern Canada. But Jack has a problem. Her latest batch of reengineered drugs designed to improve focus on work is killing people by making them overly addicted to those tasks. It turns out, though that this is not due to any mistake of hers but because the drug’s big pharma manufacturer had been lying about its potential side effects. Even so, she sets out to make amends.

Meanwhile the corporation has hired some muscle to clean up the mess. Artificially intelligent battle robot Paladin is paired with a human Eliasz and they are sent to hunt Jack down. Through this search, Paladin leans a little bit about what it means to be human through a deepening relationship with Eliasz and some self discovery. He (later, as it turns out, she) also learns about robots living autonomously in a world where indentured slavery of a kind is the norm for robots and also been reintroduced for humans.

The plot itself rattles along, occasionally dipping into Jack’s colourful past as a rebel turned researcher turned pirate. At the same time Paladin and Eliasz cut a fairly violent swathe through the illegal drug market. So that current issues of patent protection for drugs, climate change, slavery and artificial intelligence all get dealt with in interesting ways.

Refreshingly, while there is a corprotocracy, Newitz has created a future that is by no means a dystopia and her world feels plausible and lived in. That said, as is usually the case in these books, the corporations are reliably self-serving, ruthless and slippery. Overall, Autonomous is thought provoking science fiction with engaging central characters, a fascinating and believable milieu and a page turning plot. 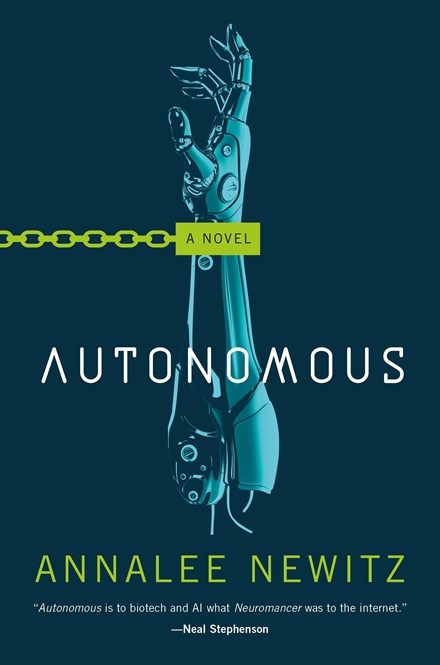