Most science fiction books have short, punchy names. Think Dune or Foundation or, more recently, The Martian. But when Becky Chambers came out in 2014 with a book titled The Long Way to a Small Angry Planet it appears she might have started a trend in long, easy to grasp science fiction book titles. Now we have Alex White’s A Big Ship at the Edge of the Universe, a book which, with its high-octane, action-oriented approach is pretty much a polar opposite of Chambers’ more thoughtful, emotional and humanist work.

Nilah Brio is a driver in the intergalactic version of Formula One. When a fellow driver is killed in the middle of a race, she barely escapes and is implicated in the murder. At the same time Elizabeth ‘Boots’ Elsworth, an expert in salvage and mysteries, is running from both a mysterious attacker who has destroyed her office and the crew of her old ship, the Capricious, who she sent on a wild goose chase to find non-existent relics. Nilah and Boots end up joining the Capricious’ ragtag crew, both on the run from their attackers and on the hunt for a legendary warship.

From this point in the story, Big Ship becomes a nonstop thrill ride involving kick-arse women, spaceships, fast cars, mechsuits, killer robots and well financed, powerful and implacable foes. And magic… On top of all the scifi trappings, most characters have magical skills which they can deploy either directly by drawing runes or through their weapons. Each person has a different specific power, including the power to influence people, throw fire or affect electronics. Variations in powers seem to appear when needed. But it is magic and the rules around it that drive the conspiracy that sits at the heart of this book.

A Big Ship at the Edge of the Universe in the end feels like a pastiche of and homage to, among other things, Firefly and Speed Racer with more than a smattering of Harry Potter. Which means that, while it might not bear too much thinking about, it is entertaining. 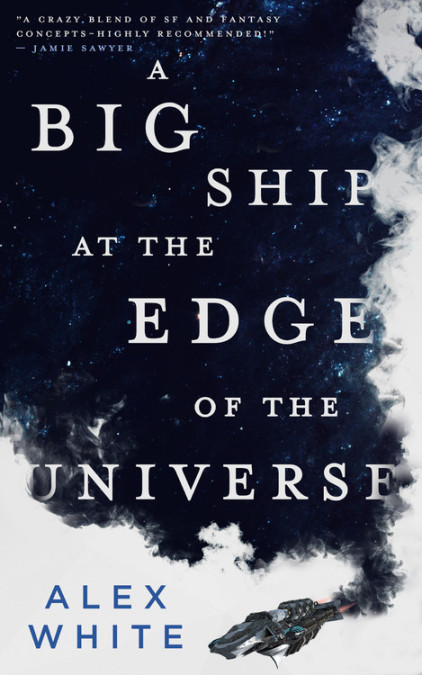