The Whipbird of the title is a new hobby vineyard, owned by barrister Hugh Cleary and venue for the Cleary family reunion. As the various branches of the family arrive – 1193 out of 2946 possible descendants of the original Conor Cleary – they are given different coloured t-shirts to identify their ancestry and Drew starts to wander among them, the point of view shifting between various family members. Drew focusses in particular on Hugh, his father Mick, brother Simon and sister Thea but also has time for plenty of other side branches of the family.

Drew uses his characters to highlight and gently satirise different aspects of the Australian experience. Most of the characters, while by no means two dimensional, stand for something or are used as exemplars of particular types of Australians.  Mick was the local bank manager until banking become more corporatised, his cousin Doug leading the charge. Simon was a rock star, now drug addled and with a condition that makes him think he has already died. After a life changing experience, Thea joined Medicines Sans Frontiers. Ancestor Conor, who is also given voice through a little authorial magic, was caught up in the Eureka Stockade, one of the defining myths of Australian history but not in the heroic way his family like to think.

Drew’s razor sharp observations throws an often acerbic light on Australia and its concept of itself. For example, this comment by Thea:

Think of a place as far away from Australia as possible, a different hemisphere with no gripe with us whatsoever, all in all a dubious proposition for an enemy and we’ll send our soldiers there without a quibble.

Or this from Mick about the decline of the banks:

The first treacherous action of the jeans-and-sneakers boys was to slash the word “Savings” from the bank’s name… It was all about shedding the time-wasting, coin-collecting tellers who emptied those quaint money boxes. And preventing little old ladies from coming in on pension day for a time-wasting chat about their savings books and their cats and their two-dollar weekly deposits.

While there is plenty of wry and cutting observation there is not much plot in Whipbird. What plot there is, kicking in about two thirds of the way through, quickly descends into a kind of old-school British-style farce. The action becomes a cascade of increasingly unbelievable setbacks for Hugh in particular. By the end it almost feels like Drew has it in for Hugh Cleary but for no apparent reason.

Whipbird is a thought provoking, sometimes laugh-out-loud and timely Australian novel. Drew has plenty to say about where Australia is today how we ended up here and provides plenty for readers to think about. But while they are engagingly wrapped in the chaos of the family reunion the narrative never quite manages to rise above this series of observations. 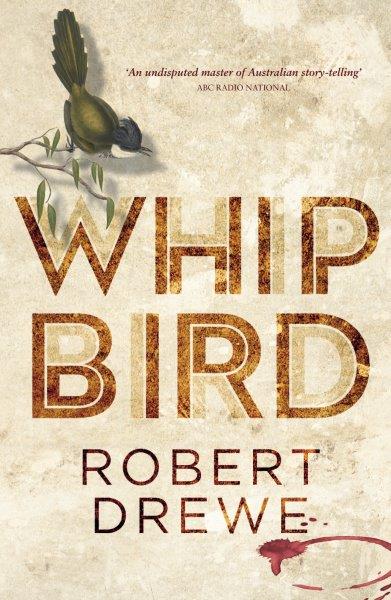