ABC journalist and host of Q&A Tony Jones put the cat among the pigeons last year when he suggested that there was Croation terrorism in Australia in the 1970s. There was fierce debate at that time around this suggestion about Croatian extremists and the involvement of the Communist Yugoslavian Government in potentially creating or manipulating the threat. In The Twentieth Man, Jones doubles down on his claims, in a historical thriller that gives Australian its own Day of the Jackal.

The Twentieth Man opens with a historical bombing in the heart of Sydney in 1972. The bombs are planted by an anonymous Croatian terrorist seeking to destroy targets associated with the Yugoslavian government. Jones uses this opening to introduce a range of characters and it is a while before the narrative settles down around a few key players, particularly Anna Rosen, junior ABC journalist and daughter of a known Communist, Al Sharp, with the Federal Police, and rogue ASIO agent Tom Moriarty. Later in the book the action moves to Yugoslavia where a group of twenty Croatians have infiltrated the country with the aim of creating a popular uprising against the Communist Government. The Twentieth Man of the title is the survivor of this mission.

Jones has crafted a fine historical thriller. The threat, when it emerges, is against the Yugoslavian Premier and becomes a race against time. But behind this fictional assassination attempt is the basis of the historical events which included the operation in Yugoslavia,  election of the Whitlam Government and in particular the installation of Lionel Murphy as Attorney General. Jones creates tension through the real events of Murphy’s war on Australia’s security service ASIO, based on Murphy’s conviction that ASIO was withholding information from the Government. All of Jones’ characters are caught up in this crusade which, in the long run, made that agency more accountable.

The story comes into focus around journalist Anna Rosen and the Croatian would-be assassin Marin Katich who, in the past, had been involved in a Romeo and Juliet-style relationship, their fathers mortal enemies. Rosen is a creature of her time, idealistic, struggling against chauvinism and happy to indulge in recreational drugs. Katich has his own struggles, trying to reconcile knowledge of his father’s wartime activities allied with the Nazis while trying to remain true to the cause he was raised in. While most of the main characters are fictional, there are plenty of historical figures both deep in the plot and included as cameos, most of whom will be familiar to Australian readers. This includes not only Lionel Murphy but journalists George Negus and Michelle Grattan and even a brief walk-on cameo from comedian Paul Hogan, from the time he was a rigger on the Sydney Harbour Bridge. And Jones also gets the feel of the period right, with plenty of period detail and non-politically correct behaviour.

The Twentieth Man is an incredibly assured debut novel and Jones has delivered a pacey and original historical thriller. While historical detectives seem to be everywhere, the historical political thriller is not a genre we have seen much of in Australia. And this one shines a light on fascinating period of Australian history, a time contemporaneous with Watergate, in an engaging and interesting way. 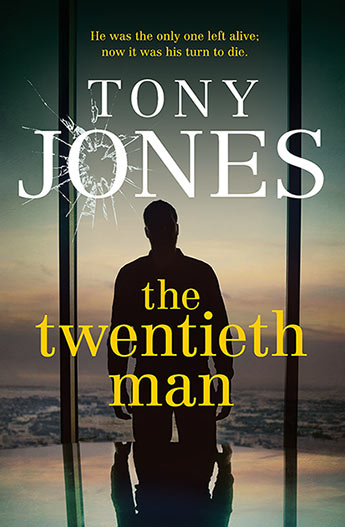