Vampires are back on the streets of London in Lee Markham’s visceral debut The Truants. Just when you thought the vampire mythology could not take another go round, Markham takes this corner of the horror genre and gives is a shake. His stated aim is to create some discomfort for readers and he succeeds.

On a bench facing east the old one waits to die. A long-lived vampire, the old one has decided to end his life by facing the sun. But before he can complete the ritual he is attacked by a street kid after money. The kid stabs him and then escapes with a broken arm but the damage has been done. The knife that is carried away is somehow infused with the spirit of the dying vampire and every person it touches absorbs that spirit. The first two of these are a two year old boy and a ten year old school boy. From there all hell, literally, breaks out.

Markham has crafted a vampire tale for modern times. His vampires are dispossessed of the streets and the tower blocks of London. The baby that the old one possesses early on is living in squalor in a drug dealer’s squat so that it is almost a relief when he is given some agency even with the violence that accompanies his awakening as a vampire. Markham does not draw easy parallels between vampirism and, say drug addiction, but is keen to explore the way in which these children are empowered and the response of the adult population. As the old one observes of his growing army:

“A gang. A singular, manipulable mass. Easy enough to turn it into a cause, give it gravity, draw them in. Make them an ‘us’, and set them against a ‘them’. The poverty and hunger and hate gifted them by the world has already done half the work for me.”

There is a deeper mythology here which drives the plot. The old one is being observed by an even older vampire. She lives a life slightly removed from the world of man and does not use her power to create chaos and destruction. So that the book builds to a confrontation between her more enlightened approach and the old one’s violence and rage.

Following the glut that included True Blood, Twilight, Underworld and The Originals it felt like the vampire corner of the horror genre was running out of steam. But Markham manages to breath some new life into the genre. The Truants is not for everyone. It is violent and confronting and not at all a comfortable read. But this is an original take on a long-running horror trope that is visceral, often poetic and sympathetic to many of its characters. 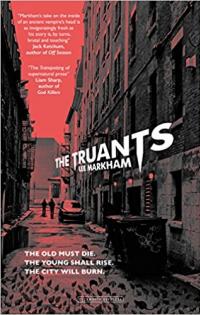