Heidi Heilig opens The Ship Beyond Time mere minutes after the cliffhanger end of its prequel The Girl from Everywhere. It is 1884 and sixteen-year-old Nix, her father and the crew of their ship, the Temptation are on the run from Hawaiian forces, unhappy about the robbery that they were involved in. What their pursuers do not know, but readers of this series do, is that Nix and her father are Navigators, they have the power to send their ship to any time and any place (including mythical places) so long as they have a map to guide them.

After a bit of map hopping early in the piece, The Ship Beyond Time settles down for most of its length in one locale. In this case it is the mythical utopian island of Ker-Ys, somewhere off the coast of France. They have come there on the promise of another Navigator, Crowhurst, that he has the power to change time. For Nix, who spent the last novel trying to prevent her father going back in time to save her mother for fear that she would never be born, this is a temptation too great to turn up.

Once again, there is a love triangle that involves Nix, the adventurous Kashmir and the more staid Blake, who joined them in Hawaii. Of the three, it is Blake who has the most interesting arc, struggling with what it might mean to change history. The tension between the three comes to a head in a stormy, action-packed finale powered by some more map jumping and mythical macguffins.

The Ship Beyond Time is aimed squarely at a teen audience, and those who enjoyed The Girl From Everywhere are unlikely to be disappointed. And while this was only supposed to be a two book series, with an open ending and a character who can, Doctor Who-like, travel to any time or place, it is unlikely that Heilig will be able to resist temptation to revisit Nix sometime in the future. 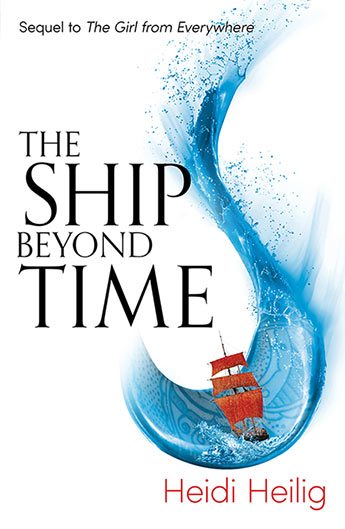