The Rise and Fall of D.O.D.O is the new hefty tome from the pen of Neal Stephenson. But this is not a tech or maths heavy read like Seveneves or Anathem. This time he has brought along fellow author Nicole Gallard who manages to considerably lighten the tone. The Rise and Fall of D.O.D.O can best be described as a romp. It is science fiction that never takes itself all that seriously. Even the acronym provides a cute running gag in the early part of the book.

In 1851, witchcraft died in the world. In the present day, a group of American military scientists are trying to bring it back using quantum theory. When they manage to do so, they use witchcraft to send their operatives back in time and manipulate history. And then their problems really begin.

D.O.D.O is narrated in a documentary style. Much of it is the memoir of Melisande Stokes, one of the early operatives of the organisation, stuck in 1851 as witchcraft is dying and writing for future prosperity. But there are also plenty of other diary entries, emails, memos and letters and even an ancient Viking Saga entitled “The Lay of Walmart”. There is plenty of humour here, not only connected with the time travel adventures but also the organisational culture of D.O.D.O, run as it is by the American military, complete with PowerPoint presentations and occupational health and safety reports. But there is also drama, cliffhangers and plenty of double and triple crosses to keep the many pages turning.

The Rise and Fall of D.O.D.O feels like William Gibson’s The Peripheral crossed with Stephenson’s own Quicksilver Trilogy with touches of The Office, Monty Python and Blackadder. There is nothing much deep and meaningful here (a speech about science near the end is about as close as it gets), it is definitely overly long and its time travel rules are applied a little inconsistently but it is a lot of fun and that makes up for most of its shortcomings. 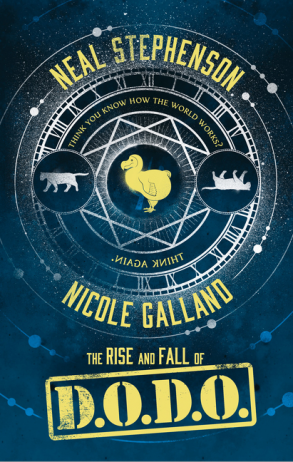