When The Restorer opens, Richard, a neighbour, is watching a family move in to the burnt out wreck of the house next door. From the outside this is a nuclear family – father Roy, mother Maryanne, an eight year old boy Daniel and a teenage girl Freya. But both Richard and the reader can sense from his first interactions with Roy that something is not quite right.

Michael Sala’s new novel, part coming of age story, part (recent) historical fiction centres around abuse within a family. Domestic violence is emerging as a theme of some recent Australian literature. Not long ago we had Katheryn Heyman’s Storm and Grace which focused on an abusive, destructive relationship. But domestic violence has also raised its head in recent debuts by Holly Throsby and Cassandra Austin.

As the family move their possessions into the house a storm is brewing. The narrative that follows reflects that on coming storm. Roy is trying to be the man that his wife desperately wants him to be. He throws himself into the restoration of the house as if it is his personal metaphor and that its renewal will be enough to demonstrate his fidelity and love. But as the year goes on he slips with emerging jealousy, outbreaks of uncontrolled rage and verbal abuse of his children, particularly Daniel. Roy knows he needs to be better but does not know how.

Sala focuses on the two women – Maryanne and her teenage daughter Freya. Both are portrayed with a deep complexity and sympathy. Maryanne for her part knows that she needs to leave but loves Roy too deeply to break away. Maryanne reaches a point where she feels that she almost has to goad him into an act that will force her to take a definitive step. Freya knows that her mother needs her but is unable to bring herself to help as she experiences the confusion of adolescence compounded by her parents’ destructive relationship.

In The Restorer, Sala manages to effectively and evocatively capture a time and a place. The setting is Newcastle, a city a couple of hours north of Sydney, built on coal and steel, both fading industries when the book opens in late 1988. The book charts the major global and local events of 1989 – from Tiananmen Square to the Newcastle earthquake. But none of this is gratuitous, the events are considered by the characters and create resonances and linkages with the plot. Most closely linked to the Freya’s situation is the rape and murder of Newcastle teenager Leigh Leigh on Stockton beach in November 1989.

The Restorer is a powerful, emotionally charged and thought provoking book. Yet again shining a light on a pervasive strain in Australian society. Sala effectively builds the tension. It is a tension based on a certain, fatalistic inevitability. He does not let the reader forget the fact that the storm was always coming and that it was always going to break.

The Restorer by Michael Sala

The Restorer by Michael Sala 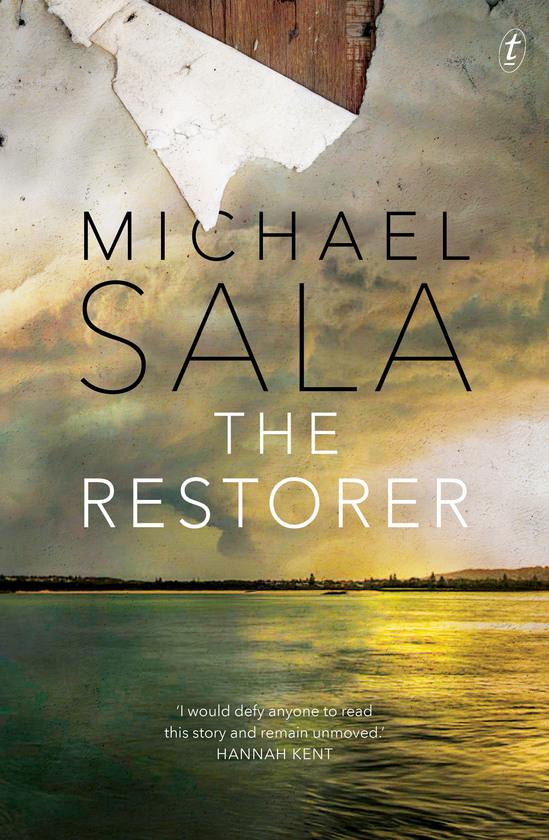