The world seems to be full of highly trained, disaffected, black ops, renegade loners who are trying to do good deeds while being hunted down by their government. Last year, Orphan X, also known as Evan Smoak, joined the ranks of the likes of Jason Bourne and Jack Reacher as the latest highly skilled loner on the block. But there is no need to have read Orphan X to get right into this novel as Gregg Hurwitz covers all of the necessary detail in one paragraph:

“…the Orphan Program, a deep-black project buried inside the Department of Defense. It had identified the right kind of boys [and as it turns out, girls] lost in the system of foster homes, covertly culled them one by one, and trained them to do what the US government could not officially do in places where it could not officially be. A fully deniable, antiseptic program run off a shadow budget.”

When the book opens Smoak has turned his back on the Program and has taken his budget and skills to the street. He is “The Nowhere Man” and will help people in trouble, asking in return only that they pass on his phone number when they know of someone else who needs his help. In this case he comes to the aid of a girl blackmailed and at risk of being trafficked. This job brings him to the attention of some other bad dudes who are after his very healthy Swiss bank account and before long Smoak has been captured himself.

Smoak finds himself up against Renee Cassaroy, a villain who has stepped straight out of the pages of a James Bond book, complete with monologues, a bunch of expendable ex-Sinaloa cartel goons (including one mute goon called Dex who is bigger and badder than the rest), a taste for fine everything and a creepy doctor doing illegal things to keep him looking young. Smoak has come to Renee’s attention due to his bank account and he initially has no idea what Smoak is capable of. But even when he works it out, Renee sees their contest as a game rather than the life and death situation that it is. At the same time, Smoak’s old Orphan crew, still out to kill him themselves, is closing in.

The Nowhere Man sits well within genre tropes but is an enjoyable action thriller. As Smoak’s situation gets worse, his self belief and ability to improvise increase. This leads to some fantastic, hold your breath action scenes. This is cartoon stuff but Smoak is a sympathetic character Hurwitz handles the action with great panache. And it is not real spoiler in this genre to suggest that there will be plenty more Smoak to come. 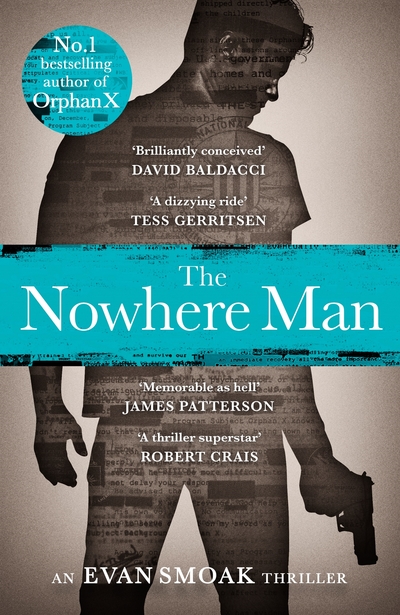