The dragons in Anthony Ryan’s Draconis Memoria series are not, as the saying might go, your grandfather’s dragons. In this world there are dragons of varying colours – green, red, blue, black and white. Each has a different preferred mode of attack and the blood of each can give specially talented humans (the blood-blessed), short-lived superhuman capabilities. Only, as The Legion of Flame opens, the dragons, led by the super intelligent white dragon, are revolting. Having taken over their home continent and either killing or enslaving the populace, the dragons are on the move.

The main point of view characters from The Waking Fire return. Lizanne, arsekicking secret agent for the Ironship Corporation, is sent on a mission to their sworn enemy the Corvantine Empire. Lizanne’s mission quickly spins out of control as she ends up in a prison city and formenting revolution. Meanwhile, blood-blessed adventurer Clay Torbeek is heading to the south pole to see if he can “save the world” following a vision of the future that he had in his encounter with the white dragon. Clay’s trajectory, while full of adventure and close calls, is a little more surreal when he finds himself in a strange world beneath the ice. Ryan also adds a new point of view character – Sirus – one of “Spoiled”, humans converted into willing and psychically connected soldiers by a mystical force controlled by the white dragon.

Legion of Flame does what good middle books should do. It broadens the world out geographically, politically and historically. But it is also a compulsively readable adventure tale. Much like the white walker menace in Game of Thrones, the smaller moments of character peril, particularly those trying to deal with local squabbles, sit within a much larger existential danger that threatens the whole of Ryan’s vaguely steampunk fantasy world. A danger that only a handful of characters truly comprehend. Ryan ends it all, unsurprisingly, with some major cliffhangers, making sure that fans will be waiting desperately for the next instalment. 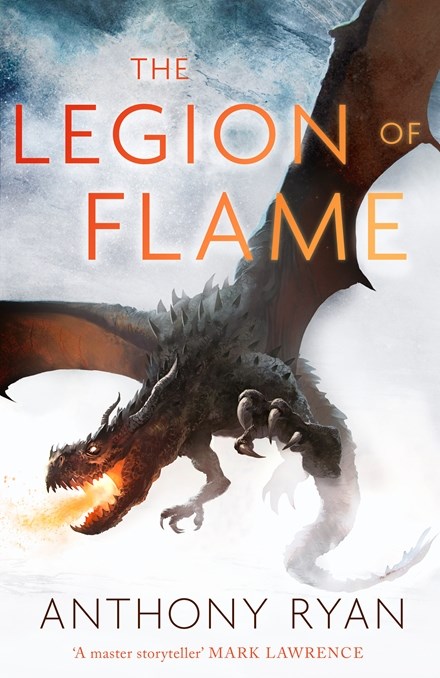