It might be a little artificial to identify a sub-genre just from book titles. But with the success of books like Gone Girl and The Girl on the Train, there is definitely a trend emerging for domestic thrillers with the word “Girl” in the title. The presence of the word in the title does not denote the often cosy romantic worlds of chick-lit but a harsher, page turning reality. They are usually narrated (at least partially) by a woman (or the ‘Girl’ of the title), that narration is often suspect to the point of being completely unreliable, and there are violent or abusive men but it is often hard to tell who is the manipulator and who is the manipulated. Part of the pleasure of these thrillers is the constantly shifting power dynamics (even if the nature of the narrative is often that it is only the reader’s perception of these dynamics that is actually shifting).

Into this mix comes a potentially big novel for 2017 – The Girl Before. The Girl Before ticks all of the Girl book boxes in spades. It has two unreliable female narrators, a supporting cast of abusive and potentially violent men and plenty of domestic thrills. It is also, when it cares to be, a reflection on architecture and how it has the power to reflect and shape us.

Emma (then) and Jane (now) are both seeking somewhere new to live. The narrative constantly shifts between the two as they fall in love with and then are approved to live in the ultra-modern house at 1 Folgate St that would normally be well beyond their means. Gaining approval to live in the house requires the completion of a strange psychometric exam and once selected, signing up to a brutal contract full of conditions. Once installed, the house, and its architect Edward Monkton, start to play an increasingly large (and increasingly creepy) part of their lives.

To say any more about the plot or even the structure of the novel would be to give away too many spoilers. JP Delaney, pseudonym for a British crime author, uses this dual narrative structure to highlight the similarities between the lives of his two protagonists but also how their personal differences impact on those similarities. Delaney manages through this structure to ramp up the tension. Jane (and the reader) knows something happened to Emma, the question is what that was and whether Jane can prevent it happening to her. Many of the twists, though come directly from the unreliability of the narration – the fact that one of the narrators has deliberately not mentioned something important or flat out lied.

The Girl Before is, in the end, an effective thriller that almost invites reading in a single sitting. The set-up is bizarrely intriguing. Much of the tension revolves around the idea that people can be caught in loops of behaviour – trying to replace someone they have lost with someone similar. And the digressions on the nature and power of modern architecture give some much needed texture to the plot. Unsurprisingly, film rights have already been snapped up for this one, so don’t expect the Girl-thriller train to slow down any time soon. 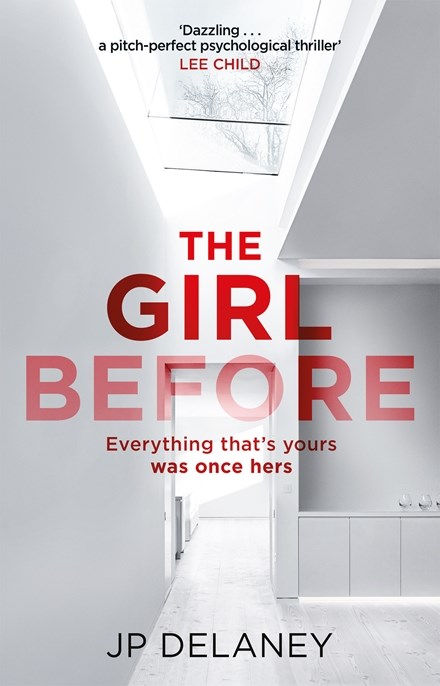