Another day, another apocalypse. In Megan Hunter’s The End We Start From, England has been hit with some unspecified catastrophe that involves rising flood waters. The usual post-apocalyptic actions take place: people are evacuated, the military comes out, borders and checkpoints are established. In amongst all of this, the unnamed narrator has her first child, Z, and the story follows Z’s first few years of life in post-disaster Britain.

Megan Hunter’s prose is spare to the point of almost being poetry. Short sentences in short paragraphs, interspersed with quotes. None of the characters have names. This gives a point of difference to a story that has now been told a few too many times. All of the clichés are there – the refugee camps, nasty roadside border guards, saviours with a boat, a short time of salvation on a remote island – but in a poetic form that makes it, to a minor extent, feel new.

The focus of the book is Z’s first few years of life. While growing up in the middle of a crisis, the narrator’s relationship with her son and her observations might well have just been happening in any daycare centre. Z smiles, Z learns how to eat solids, Z pulls himself to his feet, Z learns how to walk. Given the lack of any real threat most of the time, the vague post-apocalyptic setting and styling do not provide anything other than context for these achievements.

As a result, The End We Start From feels like an experiment in a sub-genre that is currently exploding and in which some authors are still managing to do interesting things. There is no great pandemic or war or zombies or killer robots. This is a simple tale with a non-specified, fairly benign threat. Civilization does not break down so much as reconfigure. And in very British fashion, the abiding sense seems to be Keep Calm and Carry On. There may be violence and action somewhere, but much like the Lily Brooks-Dalton’s recent Good Morning, Midnight, it happens well off-screen. This is quiet and contemplative, just a woman and her newborn son, surviving in a world that has become vaguely inhospitable. It is a poetic, if not all that interesting, post-apocalypse. 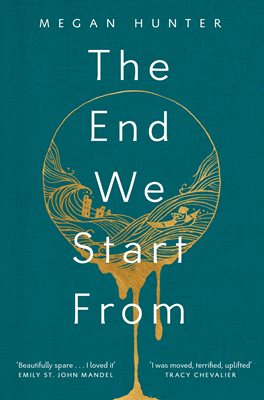